Seemingly overnight a backdrop of straw and plastic transform into an explosion of pink. Flamingo-colored mushrooms surface through an Everest of plastic bags packed with straw. There are hundreds of pink mushrooms in a wide spectrum of sizes and shapes, some of palm-sized and others as tiny as a dime.

Welcome to the mushroom project led by Nailah Marie Ellis, a farmer and member of the ProFarmer training program. Ellis officially started growing mushrooms this past spring, choosing cultivating oyster mushrooms as her key project this year. Mushroom harvesting is a first for the Farm Hub, and for Ellis a noticeable shift from last year’s project of growing strawberries.

Growing mushrooms came to Ellis as she was searching for a new project for this growing season.

She attended a speech at Stone Barns Center for Food & Agriculture by William Padilla-Brown a mycologist and contributing editor of FUNGI Magazine, who talked about the challenge of cultivating Cordyceps mushrooms, and their adaptive genetic properties. “I think that piqued my interest,” Ellis recalls. She read Mycelium Running: How mushrooms can help save the world by Paul Stamats, which spotlights the benefits mushrooms bring to the environment and ecology. She became fascinated with the role mushrooms play in agriculture and in ecology.

“They are really multifaceted and play a huge role in our ecological economy, and that’s why I was drawn to them. They are able to help the soil, and heal the earth through mycoremediation,” says Ellis referring to a form of bioremediation that uses fungi to clean the soil. The relationship between plants and mushrooms are symbiotic. An estimated 90 percent of all vascular land plants live in association with mushrooms, according to the International Plant Science Center at the New York Botanical Garden.

“I started going on mushroom walks, I went to a mushroom conference through Catskill Fungi, and I went to this mushroom retreat,” she recalls. She attended Mid-Hudson Mycological Association meetings. She collected everything she could find about mushrooms—articles, books and media posts.

She started wondering how mushrooms could fit in with farming as livelihood and began considering it in the grand scope of being a farmer. By late 2018 she committed to making cultivating oyster mushrooms her focus this growing season. 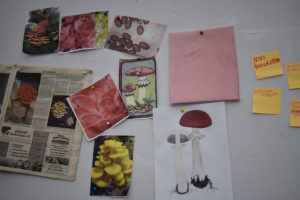 A whiteboard with Nailah’s collection of articles, photos, and illustrations about mushrooms.

In launching the mushroom project, Ellis immersed herself in workshops, talks and books (she has an ever-growing library), and she is mostly self-taught. She started by researching varieties of mushrooms. She chose the Djamor (pink) oyster mushroom and Pleurotus citrinopileatus (golden) oyster mushroom because they thrive in warm weather and sync well with the summer season in the Northeast. The mushrooms also lend themselves well to many culinary preparations. They are known for their meaty texture and easily adopt the flavors of the aromatics, herbs, and spices they are cooked with.

While the process of inoculation (mixing spawn with the substrate) to harvest can be quick compared to most crops (in this case 5 or 6 days), the steps and tools required are precise. Light, temperature, and humidity are essential when it comes to growing stellar mushrooms. Ellis built two small greenhouses within a greenhouse. The first is an incubation chamber that is darkened, and the second tent a fruiting chamber that allows naturally light to flow through where the mushrooms sprout and are harvested.

Other essential tools were a Humidistat (a humidity controller) that connects with the Hydrofogger Humidifier. Mushrooms thrive on humidity and ideal temperature. The incubation room needs to be 80 percent humidity and temperatures need to be between 65 degrees and 85 degrees in both tents. Success hinges on a delicate balance of oxygen level. The level of oxygen is purposefully decreased in the incubation chamber and stepped up in the fruiting chamber since it triggers the mycelium to produce mushrooms. 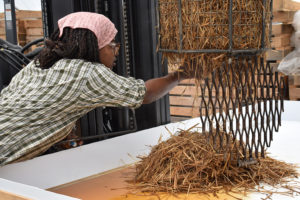 Straw is prepped for the polypropylene plastic bags.

Ellis was met early on with a challenge of how to pasteurize the straw effectively and within a budget. She was limited with the kind of equipment she could buy. A solution was to build a metal basket to hold the pasteurized straw, which would serve as a base to be mixed with the spawn. After the straw is packed into the basket it is lowered into water that has been heated to 170 degrees.

She built the table where the straw would fall from the metal basket and be mixed with the spawn. She purchased bags of certified organic mushroom grain spawn from Field & Forest Products. In this case, Ellis used straw as a substrate, which is the substance upon which the mycelium grows.  The substrate depending on the kind of mushroom being grown can include everything from wood chips and saw dust to logs.

The straw was previously chopped and baled in preparation for pasteurization. She slit holes in the polypropylene plastic bags giving space for the mushrooms to grow. Then she layered each bag lasagna fashion with one layer of spawn and the next of straw, so the mycelium has easier access to the nutrition-enriched substrate. 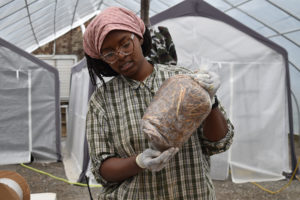 Polypropylene plastic bags are layered with straw and mushroom spawn.

The bags were placed in the dark tent for 10 to 13 days before being moved to the fruiting chamber where the harvest occurs. Most bags explode with mushrooms after five days, and by the sixth day they are ready for harvest.

Ellis estimates she can pack 30 bags in a day with every bag of spawn creating up to 17 bags when combined with the straw. Every bag can generate dozens of mushrooms. In between inoculating and harvesting, Ellis can be found in the greenhouse buried in books and articles about mushroom growing. In the greenhouse there is also a large white board that is telling of her passion. On there is an ever-growing collage of cut out articles about mushrooms, drawings, photos and renderings of mushrooms. On a pink Post-it there are the words, “Millennial Pink,” a color made popular through social media and pop culture.

“It was added bonus that they (the mushrooms) were a vibrant color,” she says. 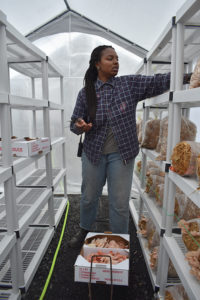 Dozens of pink Djamor mushrooms burst from the bags.

By the second week of June Ellis was busy harvesting mushrooms. She picked off the layers of mushrooms that had burst through the plastic slits. The ideal Djamor mushroom is a deep pink and palm-sized with wavy edges that curl down. Less ideal are the ones with the caps that are curled up. Many of Ellis’s mushrooms were bright pink and palm sized.

Strawberries also continue to play a critical role Ellis’ learning and experimenting. On the ground in the greenhouse is a makeshift garden, where Ellis is growing strawberries and wine cap mushrooms side by side to see whether they thrive when grown in tandem. This is part of Ellis’ exploration into intercropping, which involves planting complementary plant species in close proximity with one another for a synergistic effect. Considering most fruit don’t like to have their soil distracted, Ellis is interested in what effects one has on the other and vice versa. The mushroom project will run through October with Ellis’s planning to inoculate on a weekly basis. As the weather cools, she plans to shift to cooler varieties of oyster mushrooms.

A greater question, especially considering the flush of mushrooms, is what is next. She is working with Jeff Scott, the marketing and logistics coordinator, on a distribution plan for the mushrooms. She recently started selling some at the Kingston YMCA Farm Project’s Farm Stand. 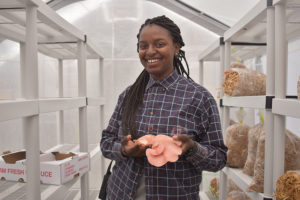 Nailah shows off mushrooms from a harvest.

Some have already been donated, and Ellis continues to use them in the cooking classes she teaches as part of her volunteer work at the Kingston YMCA Farm Project.

She finds that every day she is learning something new about growing mushrooms.

“So far, I like it, and it’s something I could see myself doing. I think there’s just been a lot of problem solving which I really enjoy,” she says. Besides growing them, she likes eating them. “I like quiche risotto, pizza, and pasta and it goes well with everything. Mushrooms and eggs are my favorite, especially sautéed up,” she smiles.

MUSHROOM VOCABULARY
Inoculate: the process of introducing mushroom spores to a substrate.

Substrate: any substance where mycelium will grow. Depending upon the variety of mushroom this includes wood logs, saw dust, corn, straw and even toilet paper rolls.

Mycelium: the vegetative body for fungi that produce mushrooms.

Spawn: a smaller amount of a nutritious material, examples include straw, enriched saw dust and logs, upon which the mycelium can begin to grow before it’s ready to colonize a substrate.

“Radical Mycology: A treastise on seeing and working with fungi” by Peter McCoy

Catskill Fungi
A business that holds a wide array of events, walks and workshops for those who are interested in learning more about mushrooms, or growing them.