The boots feel foreign, heavy with thick rubber soles, as I stand on this piece of land that is a blend of dirt and weeds. I inhale and I grasp tightly onto the shovel that a colleague hands me — it’s time to work.

“See there we need to dig a trench all the way through,” my colleague Raul Carreon says pointing down at a bowling alley length of land covered with weeds, asking me to dig a trench for a footpath.

Already he and other colleagues, the majority of them our production staff with decades of experience farming, are swiftly moving dirt. I use all of the force I can muster up and thrust shovel to ground, and the ground is surprisingly stubborn. Maybe it’s me, I think, I need to work out. 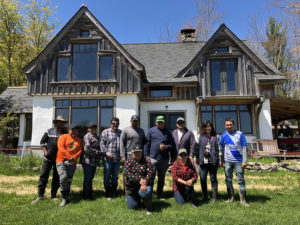 It is a Saturday in late May, I am at Soul Fire Farm just northeast of Albany with my colleagues to join in the organization’s monthly Community Farm Work Day. Later, I learn that the biannual trip has become a ritual here at the Farm Hub. It is a chance for staff to connect and work alongside members of an organization that in many ways shares similar values as the Farm Hub. With social justice at the forefront, Soul Fire Farm aims to end injustice in the food system.

On a personal level, there is another aspect of this experience, which is somewhat humbling. I am acutely aware that my passion for agriculture is extending from storyteller to participant. For the first time I am at a farm not as the Farm Hub communications manager, but as a volunteer contributor including, but not limited to, spreading straw mulch and punching in staples to hold down landscape fabric that helps protect the soil, mixing in compost and mulch for perennials, forming soil blocks for planting, and cleaning out seedling flats. I had a chance to see firsthand how much time and investment goes into running Soul Fire.

As I shovel, create soil blocks, and dig, I reflect that Soul Fire is one of the few farms in the U.S. that is led and staffed almost exclusively by people of color, the majority of whom are Black.

As a first-generation Chinese American, I hadn’t given much thought to the significance of having more leaders of color in farming until now. In the U.S., agriculture as a sector and as a sector remains predominantly led by older white men.

According to the latest U.S. Agriculture Census 2017, released this past spring, the average age of all U.S. farm producers in 2017 was 57.5 years, a rise of 1.2 years from 2012. When it comes to farm owners, 95.4 percent are white, 3 percent Hispanic, 1.3 percent Black, 1.7 percent American Indian/Alaska Native, 0.6 Asian, and 0.1 percent Native Hawaiian/Pacific Islander. An estimated 64 percent of farm owners are men while 36 percent are women. 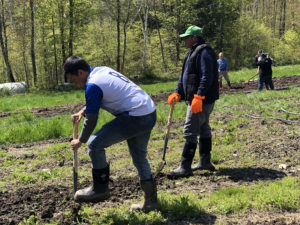 As I worked the land that day, I considered the connections between culture, heritage, personal history, the historical foundations of current-day agriculture in the U.S. and land ownership. Earlier that week I attended a one-day “Uprooting Racism” workshop at Soul Fire, designed to increase awareness of how racism permeates the food system and to encourage brainstorming around solutions. The workshop was also attended by Jay Goldmark, the Farm Hub’s fields crop production manager and Caitlin Salemi, manager for organizational culture and team development.  We were joined by participants from as far as California and Georgia, many of them small growers and community activists. Through discussion and activities, we examined our own personal histories through a series of questions, some of them personal. Growing up, did we ever rely on food stamps or go hungry? Did we have ready access to food? Did we grow food or did our families?

It was one of the first times I reflected on land beyond food production for sustenance. Land ownership is power, the knowledge and ability to grow food a part of survival, and seeds that produce certain foods provide a connection to one’s culture, heritage, and at times family history. In agriculture in the U.S., Blacks, Hispanic/Latinos, Native Americans and Asians have contributed farming techniques and strategies from their homelands.

That said, the contributions of people of color often remain under-told when it comes to farming. For example, during World War II the Mexican Farm Labor Program Agreement of 1942, also known as the Bracero Program, brought over Mexican laborers to keep the food system running while Black agricultural workers were fighting in the war. Starting in the late 1800s in California, Japanese immigrants served primarily as sharecroppers and laborers at farms in the Salinas Valley, replacing Chinese laborers who were banned from the U.S. under the 1892 Chinese Exclusion Act. The Japanese immigrants were the prime strawberry growers in the Central Valley until they were incarcerated in internment camps during World War II.

There is an untapped opportunity to lift up this history and share these stories. When it comes to food and farming there are leaders and innovators in the African-American community who deserve to be celebrated. George Washington Carver, an agricultural scientist and inventor, invented hundreds of products using peanuts and soybeans. Fannie Lou Hamer launched the Freedom Farm Cooperative to empower Black farmers and sharecroppers, and Booker T. Whatley, agricultural professor at Tuskegee Institute in Alabama, helped design the CSA (community supported agriculture) model of agriculture.

Turn the clock forward and there is a new generation of young farmers of color emerging, including Asian-Americans who are passionate about contributing to agriculture and also honoring their heritage by growing Asian vegetables. Here in the Hudson Valley, for example, Katherine Chiu and Abe Young launched the Asian Vegetable CSA where they grow vegetables of Asian varieties such as Daikon radish, bitter melon, and sweet potato leaves.

Now the reflections circle back to my own history tied in with cultural heritage.

My parents never farmed and agriculture doesn’t run in the family. My sister and I, first-generation Chinese Americans, grew up in the suburbs north of New York City where supermarkets were synonymous with fresh vegetables.

While farming wasn’t part of my family legacy, food was. From a young age, I learned that food is a powerful connector and convener for the Chinese. When visiting our  grandparents and relatives in Hong Kong and Taiwan, their affection for us was often communicated through two words, “eat more” and even to those of us who could afford to shed a few pounds, “you’re too skinny, eat more!” My father, who cooked his way through college, showed his love for family and friends by opening the home to traditional hot pot, which often featured Chinese cabbage and an assortment of seafood. My grandmother, with whom I lived for a period of time in Hong Kong, showed her love for me by saving the freshest produce. I returned home to slices of Durian or the meatiest part of the salmon.

My parents tapped into the then small but closely-knit Chinese communities of associations and a Chinese church where every gathering was bookended with a cosmic-sized potluck of dishes diverse and complex in look, smell, and taste. Later as an adult, I easily identified them—Shanghai bok choy, Daikon radish, Chinese cabbage, and Yardlong beans. These were ingredients for homemade dishes of scallion pancakes, dumplings, and fried rice.

In my early 20s, I took two suitcases and moved to Hong Kong to write about the handover in 1997 when Hong Kong was returned to Mainland China as a British colony.

Here I had my second culinary awakening. Considering the tight urban metropolis of Hong Kong and the tropical weather, most residents shopped at the wet market regularly; in Hong Kong wet markets are open market stalls in most neighborhoods selling vegetables, fruits and seafood, and household items.

There was a tremendous premium placed on fresh. The wet markets were a window to a litany of fruits and vegetables I’d never seen before: bitter melon, taro, lotus roots, mushrooms of all sizes and shapes. Food was central to any gathering. Entire conversations and connections were ignited over witnessing the catch of the day or how crisp the vegetables were.

Food was also a window into my family history. My father says that growing up as a young boy in Communist China and later Hong Kong, there wasn’t ready access to meat, eggs and other food to go around. In the stories he shares of his boyhood, a picture emerges of tough times — he and his siblings shared one popsicle, and chicken and beef were saved for special occasions. Food, land, and their connection to family history is humbling in that it pushes us to see how small we are and yet how we are part of something much greater. For myself, my father’s stories that incorporate food are a glimpse into his growing up and my own history. They offer, for example, clues as to why my paternal grandfather viewed land ownership as sacred, both as a base for sustenance and a foundation to literally build one’s home. I now fully understood that food was a language of love and care. 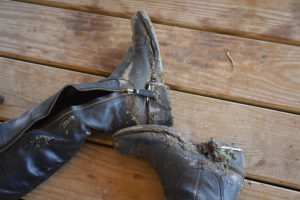 Now, on this beautiful day at Soul Fire Farm, earthworms ribbon through soil. A yellow butterfly flutters past and the greenhouse comes to life with baby lettuce.

I feel a boost of confidence that the land, while steady and always there, offers opportunities for change, transformation, or maybe ripple effects that create change. Change can begin when one finds a connection to the land itself in whatever form that might take. Sometimes it is a memory, a reflection, the moment when we connect the food on the table with the land, or the seeds with the food on our plate. Maybe it is a farming technique or a certain vegetable that is linked with cultural heritage.

“The same background, just change the focus and one will see different beauty and learn new insights. This is true of people and life, try it,” my father’s wisdoms surface.

I left the farm that day, boots muddied, dirt under my fingernails, enjoying a connection to land that transcends barriers of race, ethnicity, and age, but that also carries our personal histories. I couldn’t wait to return to the Farm Hub with an extended appreciation of the process of farming. It was a blessing to be able to tell the stories related to food, farming and agriculture, and a double blessing to engage in growing too.  The land now felt like home.

A special thank you to Leslie Wiser of Radical Family Farms: Specializing in Asian Heritage Vegetables in Sebastopol, Calif.