On Wednesday, March 28, an enthusiastic audience of over 200 gathered at the Senate Garage in Kingston for the debut screening of “Seeds of Hope,” a short documentary that tells the story of a collaborative initiative to preserve Native American culture and foodways through seed saving at the Farm Hub.  The project was formed in 2016 as a partnership between the Mohawk/Akwesasne tribe of northern New York State, the non-profit Seedshed, and the Farm Hub.

The film’s director, award winning filmmaker and environmentalist Jon Bowermaster, introduced the 24-minute documentary which features interviews as well as activities from planting to harvest, illuminating the beauty of the Hudson Valley season by season.  A panel discussion with project participants followed the film screening, with Farm Hub Director, Brooke Pickering-Cole moderating the discussion and questions from the audience. Panelists included Ken Greene of Seedshed, Indigenous Seed Keeper and educator Rowen White, Karahkwino-Tina Square from the Native North American Travelling College, and Kenny Perkins of the Akwesasne Task Force on the Environment. 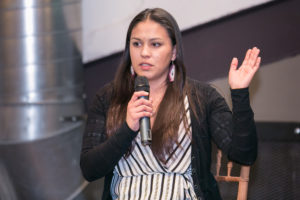 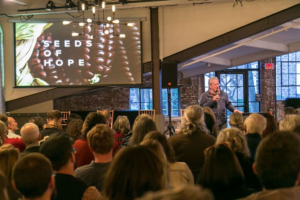 White spoke eloquently about the ways in which projects like the Seed Sanctuary can help address persistent issues caused by the loss of land and culture through “reconciling the intergenerational trauma…Not one person is untouched by the broken story with land and food and place.”

Panelists described youth programs at Akwesasne, where corn, beans, and squash grown at the Farm Hub and sent north are helping a new generation reconnect with food traditions and with Mohawk language, ceremonies, and songs associated with food. These efforts are helping young people “transcend the syndrome of not knowing who they are or where they came from.” After all, as White observed, “many are only one or two generations removed from the seed song carriers.”

“Seeds of Hope” accompanies two other films in a series produced by Bowermaster’s Oceans 8 Films entitled “Hope on the Hudson.” Click here to view the full calendar of screenings.

Visit our photo gallery for photos from the March 28th event.

Click here to view the Seeds of Hope trailer.