Small grains are staging a comeback. The small grains trial at the Farm Hub is designed to test which grains (and which varieties) show the most potential for local farmers.

Throughout the 1800s, small grains like wheat, rye, and barley were big business in the Hudson Valley, feeding a hungry market of bakers, brewers, and distillers in New York City. The development of the Erie Canal and railroads in the first half of the 19th century put New York grain farmers in direct competition with those in the Midwest, and in the Hudson Valley this competition displaced almost all small-grain production in favor of other crops.

Small grains are now staging a comeback. In the past decade, expanding markets for craft beverages and artisanal baked goods have led to an increase in demand for locally produced grains. In 2014, as part of its mission to support Hudson Valley farmers, Local Economies Project, in partnership with Cornell Cooperative Extension of Ulster County (CCE) and Cornell University’s College of Agriculture and Life Sciences (CALS), began a five-year study at the Hudson Valley Farm Hub to measure the viability of small grain cultivation for local agriculture.

Throughout the country, people are increasingly invested in where their food comes from and want to “buy local.” In New York, the Craft NY and Farm Brewing Acts have eased regulations on small-scale brewers and distillers, making it easier to brew, distill, distribute, and sell craft beverages. Most relevant for farmers is that the legislation also requires brewers and distillers to source a certain percentage of their ingredients from New York farms. Currently, the legislation requires 20 percent of grains and hops to be state-grown, with a gradual increase to 90 percent by 2024. Another source of demand is GrowNYC’s Regional Grains Project, which obligates bakeries at their Greenmarkets to use at least 15 percent local grain in their baked goods.

Even without the boost offered by these guidelines, the market for small grains is projected to grow. Niche demand for small-scale artisanal baking, brewing, and distilling has expanded significantly in the past five years. New York now boasts over 200 breweries, compared to just 38 in 2003. The number of distilleries in New York has also grown, from a mere 10 in 2011 to almost 80 today. Craft beverages require significant amounts of small grains over the course of a year. A microbrewery, for example, is defined as producing less than 15,000 barrels per year, but would still need over 400 acres of barley alone to maintain production. 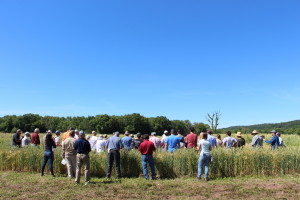 With its proximity to the New York City market, the Hudson Valley is uniquely situated to reap the rewards of the increasing demand, but small grains have yet to regain a major foothold in the region. Several producers throughout the area, including Migliorelli Farm, Hawthorne Valley Farm, Lightning Tree Farm, and Wild Hive Farm, are growing in limited quantities. While the quality of the grains has been high, they are not yet produced on a scale to meet the burgeoning demand.

Jacob Meglio, brewing partner at Arrowood Brewery in Accord, says locally produced small grains can be hard to come by. “Everything is super limited,” he explains. Like many other Hudson Valley brewers, Meglio had to venture into the Finger Lakes to find organic growers with the capacity to supply his brewery. Because it has been so long since small grains have been grown at scale in the region, many local farmers would benefit from information on best practices for varieties, techniques, and equipment before they decide if growing small grains is right for them. “The incentive structure is there now as breweries are buying up local stock,” says Meglio. “We need more local farms to grow grains.”

The small grain trial at the Farm Hub is designed to test which grains (and which varieties) show the most potential for local farmers. Throughout the course of the five-year trial, which began in 2014, spring and winter varieties of wheat, rye, and barley are planted and tested for factors such as resiliency, ease of post-harvest handling, and overall quality. The trial includes end-user testing by local millers (Wild Hive Community Grain Project) and bakers (Our Daily Bread, Bread Alone).

2016 was the first year in which six select varieties were all planted in field-scale plots (1.5 acres each). Each of these is being grown simultaneously under organic management and conventional integrated pest management in order to evaluate different commercial growing scenarios. Standouts from 2016 include Medina, a soft winter wheat that is good for pastry and baking markets, and Brasetto, a winter rye that has had impressively high yields. As Justin O’Dea, an educator with CCE of Ulster County who has been shepherding this project says, “so far this year we’ve been able to hit the quality marks for all of our varieties, proving they are all marketable.”

Another important aspect of this project remains farmer engagement and ongoing feedback from millers, bakers, and distillers on these varieties as they’re harvested. For instance, in 2016, the Farm Hub hosted a small grains field day that featured a tasting and viewing of dozens of different varieties of wheat, barley, rye, oats, emmer, einkhorn, and spelt. The varieties selected for the trial also partly reflect the feedback received, including a request from bakers and millers to try heritage varieties to see what novel flavors or qualities they might offer.

The small grains trial will begin again in 2017 as soon as field conditions allow for planting, likely in mid-April. By continuing the cycle of planting, harvesting, and testing, the Farm Hub hopes to provide the information farmers need to decide if small grain production is viable for them, and to choose best management practices once they actually begin production.

Visit the Farm Hub website for more information on our small grains project. Also, see our comprehensive overview, Reviving Grain in the Hudson Valley. Annual summaries of the trial are available on CCE’s website.