On a recent weekday, a greenhouse at the Hudson Valley Farm Hub buzzes with activity – chatter, snipping, the whir of heaters. Here in Hurley, it is the start of the winter, remnants of the last snowfall evidence of the season’s shift, but the vegetable crew is hard at work harvesting greens for mixed salad. This is a new landscape at the Farm Hub – the launch of year-round production, which means the farm will be growing vegetables through the winter for the first time. Along with this comes the introduction of the winter growing season and an array of cold weather crops such as kale, spinach, and collards. 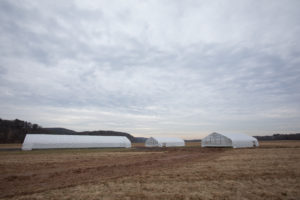 The Farm Hub is one of a growing number of farms in Ulster County and the region moving into winter production. The shift is prompted in part by growing demand for fresh vegetables in the winter, and the rising trend of grow local, buy local, says Katy Kondrat. Kondrat is the market manager at Kingston Farmers Market, now in its fourth year of offering a winter market.

“I think people having access to fresh local food year-round is a great thing,” says Kondrat of the Farm Hub’s entry into winter growing. “There is a demand for fresh produce in the winter months. I think the Kingston demographics are changing – consumers are wanting local produce all year, they also like the community feeling of a farmers’ market.”

The Farm Hub’s winter production plan includes education for the production staff. On days when the crew isn’t planting, washing or harvesting, they have the opportunity to attend a series of educational workshops on winter growing. It also means that this year for the first time they will remain on the farm for the entire year. 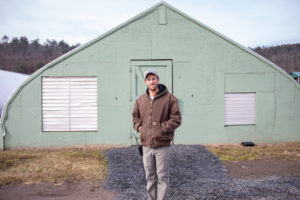 The Farm Hub started gearing up for the winter season as early as August. Three new hoop houses were installed and two existing greenhouses were upgraded for winter work. The hoop houses are now packed with spinach, collards, and kale (some already ripe for harvest), while the greenhouses are producing leafy greens such as bok choy and micro greens for mixed salad.

The winter season unofficially started in October with the last harvest expected in March, says Jeff Arnold, the vegetable production manager at the Farm Hub who oversees the production team of nine.

Much of the produce, including carrots, sweet potatoes, spinach, salad greens, and cooking greens are being sold at Kingston YMCA this winter. For the first time, the Kingston YMCA Farm Project and Farm Hub are collaborating to bring fresh produce to midtown Kingston through the winter by holding a market each Thursday afternoon in the lobby of the YMCA. The Farm Hub is providing the produce, and a portion of proceeds from sales go to the YMCA Farm Project’s youth programs.

The response has been tremendous says Jeff Scott, the Farm Hub’s marketing and logistics coordinator who staffs the market alongside YMCA Farm Project youth.

At the Farm Hub, Arnold began training the crew for winter farming in the summer.  They started by designing and building boxes to grow microgreens inside the greenhouses, which will be heated throughout the winter. Arnold acknowledges that there are challenges involved in winter farming.  These include subzero temperatures, production that is limited to cold resistant crops, and a finite amount of indoor growing space. 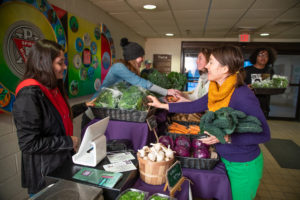 The Kingston YMCA Farm Project and Farm Hub are collaborating on a new winter market.

But what appears certain is that the Farm Hub is part of a growing trend here in the Hudson Valley. Long Season Farm, an organic farm in Kerhonkson in Ulster County, launched year-round production five winters ago and started a corresponding CSA program, in part driven by the farm’s need for more income.

At the time, there were only a handful of farms doing year-round production, says Sam Zurofsky who runs the farm along with wife Erin Enouen.  They were unsure of what to expect from the short growing season and the harsh winter weather.

“Because there is less sunlight, things take longer and there is less space to grow,” says Zurofsky. At the Farm Hub, for example, vegetable production is consolidated from 30 acres to roughly 3,000 square feet per greenhouse. Winter production often comes with higher costs too, says Zurofsky pointing to the necessary hoop and greenhouses, the latter of which need to be heated. Enthusiasm for fresh produce offset the initial investment and costs, he says.

“People were super excited to get a bag of fresh arugula in February or one bok choy,” says Zurofsky. “We realized there was a commercial opportunity.”

At the Farm Hub shifting year-round production also means the production crew will be staying on the farm throughout the entire year. Families with school-age children won’t be uprooting their kids from schools, and most will stay on the farm for the holidays, says Arnold.

Education is also a unique and important part of the year-round production program and is part of the Farm Hub’s overall mission, says Caitlin Salemi, manager of organizational culture and team development at the Farm Hub.

When not farming, the workers attend weekly professional development workshops held primarily in Spanish on a variety of topics including organic growing practices and computer skills. The monolingual Spanish speakers also take classes to help improve their English language skills. 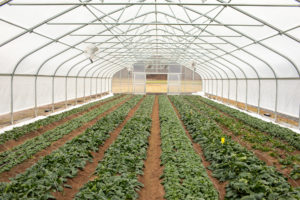 Inside a hoop house.

The organic workshops focus on topics from pest and disease control to best winter fertility practices.

“I have learned a lot. I knew how to harvest and to cut, but I never imagined I would be in an English class. It had not crossed my mind until now that I’m living it,” says Lorena, a member of the vegetable production crew.

Her husband Samuel says building beds for the winter was a new experience. “It was a long process, making the beds, and planting the spinach. It was something amazing,” he says. “This year has been really productive and we’re on a really good track.”

One class was facilitated by Ashley Loehr a farmer at Sparrowbush Farm in Columbia County who herself began winter farming seven seasons ago.

“I got into winter production because it was such a market niche,” Loehr says. “It’s a fun and crazy to thing to learn about…For me as a winter grower that was a steep learning curve because it’s such a different animal.”

Long Season’s Zurofsky adds that there is room for additional research in the area of winter farming that can be helpful to area farmers. “The Farm Hub is a great resource in the Hudson Valley, especially when they work to connect research-based innovation with the needs of farmers in the area,” says Long Season’s Zurofsky. “I hope that their (Farm Hub) foray into winter growing helps build the knowledge base for both farmers and the community.

In Kingston, Solid Ground Farm’s owner Wes Hannah is positive about the Farm Hub’s winter production. “The more interest there is in buying locally 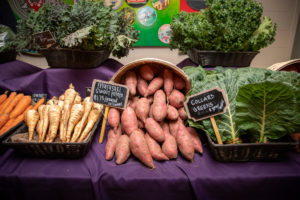 in the winter the better off we are,” says Hannah, who sells his produce at the Kingston Farmers Market’s winter market. “It’s a rising tide that floats all boats,” he says adding that it is a win-win for growers and consumers. “As more farms are popping up (in the region), there’s more capacity to fill an unfilled market.”

Back on the field in the hoop house, Arnold points to the fan-sized spinach and collards, some of it will soon be ready for harvest. He’s excited about the program and says the Farm Hub team is committed to expanding winter food production in the future.

“There will eventually be more greenhouses and in years to come there will be more production,” he says.