Crops like carrots and beets can provide farmers with a source of revenue after the growing season is over.

This year, the Farm Hub once again conducted trials on root vegetable varieties that are widely grown in the Hudson Valley. Because root vegetables store well, crops like carrots and beets can provide farmers with a source of revenue after the growing season is over. Building upon the information gleaned from last year’s trials, the Farm Hub partnered with Crystal Stewart of Cornell Cooperative Extension’s Eastern New York Commercial Horticulture Program (ENYCHP) to test how different varieties perform in the field and on the plate.

Sixteen varieties of carrots and 13 varieties of table beets were included in the trials this year. In late September, once the crops were harvested, farmers were invited to the Farm Hub for a twilight event led by Crystal. Along with taste tests, attendees were provided with an overview of the project. Crystal explained how Farm Hub and ENYCHP staff measured and tracked the traits of each variety during planting, harvesting, and storage stages, including resistance to disease, yield, quality, storability, and, of course, taste. 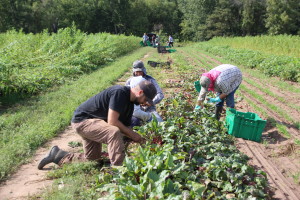 Harvesting beets at the Farm Hub

Both carrots and beets, for instance, are susceptible to fungi that can damage the leaves, making them harder to sell. Natural resistance to Cercospora (leaf spot in beets) and Alternaria (leaf spot in carrots) and other diseases can reduce the amount of necessary maintenance and management, increasing profitability and flavor. Under organic practices few materials are available to control these fungi. Storability is another important factor allowing for a steady income stream over the winter. Even if a carrot or beet comes out of the ground tasting great, it may not hold up well in storage due to poor cultural practices and genetics.

Standout carrot varieties from last year included newer hybrids, with fanciful names like Envy, Magnum, and Goldfinger. These produced favorable yields and maintained their taste over several months of storage. For red beets, Rhonda and Boro had the most yield, while Touchstone Gold came out on top among yellow beets. Interestingly, the tops of yellow and white beet varieties were much more resistant to fungal infection than those of red varieties.

Twenty pounds of each carrot and beet variety have now been placed in storage. In the months to come these will be tested for sugar content and taste. The results will be published next spring by Cornell Cooperative Extension.

For more information about the root trials and last year’s results, click here.