Edamame’s Potential in the Hudson Valley

Edamame’s Potential in the Hudson Valley

Integral to the Farm Hub’s mission is a commitment to testing promising new vegetables and grains through field trials tailored to Hudson Valley conditions. The lessons learned can be shared with local farmers so they can benefit from our observations before taking the risks involved in trying out new growing methods and working with unfamiliar crops. As part of this initiative, this past year the Farm Hub posed the question: Does edamame (commonly defined as unripened green soy beans fresh from the pod) have the potential to supplement green bean production for Hudson Valley vegetable growers?

Initial findings from the field trial show promise. With little modification, edamame can be grown using the same equipment as that used for growing green beans, and it is resistant to certain soil-borne diseases like white mold (sclerotinia) or insects that can plague green beans, such as potato leaf hoppers. Like green beans, edamame is beneficial to soil health in that it helps to fix nitrogen. But perhaps the most substantial benefit is the yield, which can be almost 40 percent higher than that of green beans. On just .8 acres, the Farm Hub harvested over 7,000 pounds of edamame this season, as compared to 5,000 pounds of green beans. 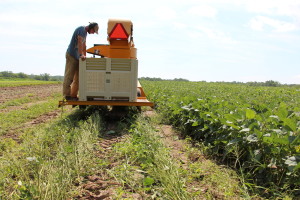 For the trial, the Farm Hub worked with Martin Stosiek of Markristo Farm in Hillsdale, New York, and planted two varieties of edamame, Chiba Green and Midori Giant. With years of experience growing edamame organically, Stosiek offered his expertise to the Farm Hub on such aspects as when to harvest the crop and how to adjust machinery to optimize crop cleanliness. Now that the beans have been harvested, they will be evaluated to see how well their taste, texture, and quality hold up in the freezer. Freezing is an important factor as it can extend the time between cultivation and delivery to market, allowing a specialty product like edamame to appeal to wholesale buyers.

Although the season has shown some promising results, edamame cultivation is not without its challenges. Machine harvesting edamame requires more labor for picking and sorting than it does for green beans. As a result, it requires more harvesting and sorting time. It also requires greater precision in planting; for example, if the seeds are planted too deep they might not be able to emerge. Similarly, heavy rainfall after planting reduces the germination rate. The demand for edamame may not match that for green beans, which enjoy steady sales as a staple crop at farmer’s markets, but the Farm Hub team is optimistic about edamame’s potential and plans to take the trial one step further next season. To eliminate tillage practices, edamame and green beans will be planted in a rolled and crimped stand of rye. We look forward to sharing more about this intriguing crop in 2017.