The Native American Seed Sanctuary is now in its fourth season

In the 2019 season, the grow-out includes new varieties of corn and beans and the addition of flowers

Now in its fourth growing season, the Native American Seed Sanctuary at the Farm Hub continues to thrive. The traditional three sisters planting of corn, beans, and squash encompasses 18 varieties of beans, nine varieties of corn, and two types of squash. 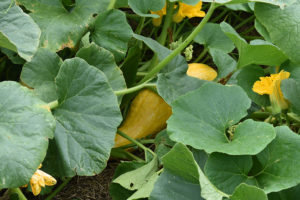 This year’s grow-out includes a continuation of Buffalo Creek Squash and Onondaga sunflowers (Mohawk name is Ononta’kéha Oron’ónhta). There are also new varieties of corn and beans, including Six Nations Blue Corn and Mother Earth Bean, flowers, and a collection of seeds that reflect the diverse background of our staff.

Inside the one-acre sanctuary, there is an explosion of color—maroon and yellow Zinnias, Woodland Tobacco (also known as Nicotiana sylvestris), and Borage, an annual herb which attracts pollinators. This year, staff contributed seeds from their cultural heritage. Amy Wu planted a selection of Asian vegetables, Silvia Tafolla planted squash and corn from Mexico, Adriana Pericchi introduced a potted Moringa tree, Caitlin Salemi planted celery, and Dyami Soloviev of Seedshed, the coordinator of the Sanctuary, planted flax from Greece. 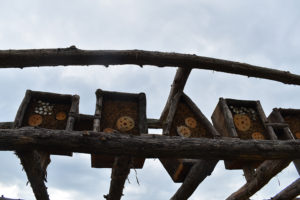 Also new this year is a bee habitat arbor that acts as a gateway to the Sanctuary and is home to solitary bees. The arbor, installed by the Hudson Valley Bee Habitat, and co-designed with Mary Arquette, one of the Seed Sanctuary leaders from Akwesasne, is designed as the Wampum belt, which symbolizes peace among the Haudenosaunee nations.

The beans, corn, and squash flourish in the traditional Three Sisters planting strategy. They grow in tandem with each other. Beans provide nitrogen to the soil while the vines climb the corn stalks and squash suppresses the weeds. Seedshed director and Sanctuary co-leader Ken Greene says, “Sunflowers are sometimes considered the fourth sister. We love having them watching over the garden and attracting the birds away from eating the corn.” 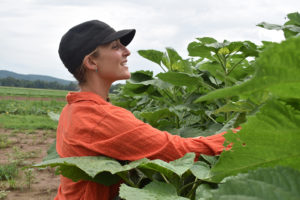 The buffalo creek squash can weigh in as much as 40 pounds. The Three Sisters are on schedule for harvest with beans beginning in August, and squash and corn in September through October.

The end of the season will be marked by an annual harvest day celebration, and post-harvest all of the seeds and any food produced are cooperatively harvested and taken back to the Akwesasne community by indigenous sanctuary leaders.