Now into its third year, the Native Meadow Trial was established with three distinct forms of management—one involved planting several native flower species and a single native grass, another included planting fewer native flower species and more grasses, and a third serves as the control and is essentially a fallow field. New this year is the introduction of crops into the picture. 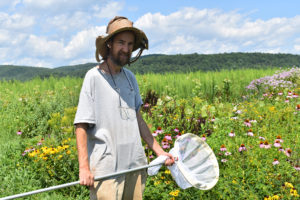 Lead researcher Conrad Vispo stands before a mix of butternut squash and flowers.

The Applied Farmscape Ecology Team, coordinated by Anne Bloomfield of the Hudson Valley Farm Hub together with members of the Hawthorne Valley Farmscape Ecology Program,  collaborated with the vegetable production team to add butternut squash into the meadows. Against a backdrop packed with flowers including Wild Bergamot, Purple Coneflowers and Brown-eyed Susans is a flourishing blanket of squash. As of early August, the squash was beginning to flower and set fruit.

“One of the goals with those experimental wild flower plots is to see if we can’t increase beneficial insects by creating such habitat. While we are measuring insect populations in the native meadow test plots (and initial results suggests that certain beneficial insects do increase), the more practical question is – would such habitat make any difference to adjacent crops?” asks lead researcher Conrad Vispo. “Does squash next to a fallow field do better/worse than squash next to one of our flowering beds?” 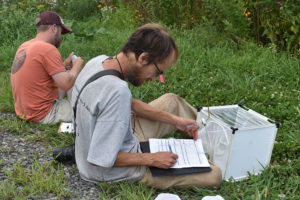 Jeff Arnold, vegetable production manager, says squash was picked because “it’s highly susceptible to insect pest pressure and it is something that flowers and requires pollination, and its relatively low maintenance. You plant and water it and it is good to go.” 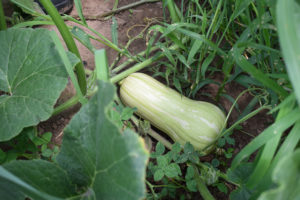 Also new to the Native Meadow Trial this year is Gabriel Perron of Bard College who, together with his students, is soil sampling in the Native Meadow plots and conducting microbial analysis. Their focus is on understanding the unseen soil life and how that relates to soil management and production.