Seeds of Hope: A Pollen Path to Reconciliation

On October 26, The Farm Hub and SeedShed held a panel on the burgeoning seed sovereignty movement and the Native American Seed Sanctuary at the Farm Hub.

Seeds of Hope: A Pollen Path to Reconciliation

On October 26, the eve of the harvest for the Native American Seed Sanctuary at the Farm Hub, core project members came together to speak to the community about the significance of seeds in indigenous culture, the burgeoning seed sovereignty movement, and the Seed Sanctuary as a manifestation of both.

Over 100 people gathered in the front room of the Marbletown Community Center for the event which was hosted by the Farm Hub and SeedShed. The panel discussion, “Planting Sacred Seeds in a Modern World: Restoring Indigenous Seed Sovereignty” was facilitated by Ken Greene, co-director of SeedShed and founder of the Hudson Valley Seed Company.  Panel  members included:

The evening began with a presentation by Rowen White, a renowned seed keeper, farmer, educator, and member of Mohawk Akwesasne tribal community, who spoke about “finding [her] way home through the lens of food and seed.” Though raised in a family that was disconnected from its ancestral traditions of agricultural cultivation and ritual, White gravitated to farming instinctively. This exploration tapped a “wellspring of grief” over lost cultural traditions and foodways, fueling a deep desire to reclaim that heritage. 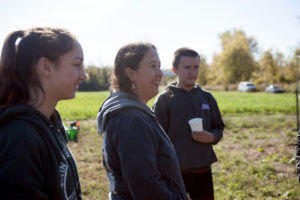 Her journey with the seeds and ceremonies of her lineage is a story shared by many indigenous people. It is the story that beats in the heart of the growing seed sovereignty movement. “Seeds offer a beautiful pollen path to reconciliation.”

The Genesis of the Seed Sanctuary

White told the story of how the Native American Seed Sanctuary took root at the Farm Hub. In May 2016, on her way back from a conference of indigenous seed keepers, she stopped in the Rondout Valley to visit her old friend Ken Greene, founder of the Hudson Valley Seed Company, leaving him bean varieties from the Haudenosaunee people that she sensed didn’t want to go out west with her. “The beans wanted to stay and be planted in their ancestral soil.” A few days later, as White was driving through the Great Plains, Greene called with the nascent idea of collaborating with the Farm Hub on a native seed sanctuary—a sanctified place to plant and rematriate traditional indigenous seeds, returning them to their home soil.
The project coalesced quickly— with Ken Greene coordinating, the Farm Hub pledged land, equipment, and staff; White provided seeds; members of the St. Regis Mohawk tribe of Akwesasne came to bless the land and help prepare the plots; and within weeks, the first crops were planted.

White provided the Farm Hub with Onondoga sunflower seeds as well as Mohawk Red Bread corn, Canada Crookneck squash, Buffalo Creek Squash, and Iroquois Buckskin Brown beans for a traditional “Three Sisters” planting. The Seed Shed is managing the hand-cultivated plots, while the Farm Hub is handling the larger grow-outs. Together, the Farm Hub and Seedshed teams are overseeing harvest and seed saving activities with the active participation and advisement from the Akwesasne community. 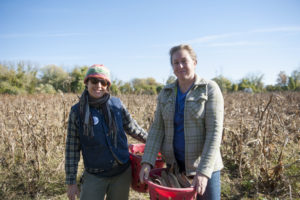 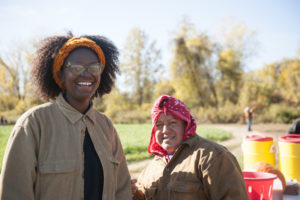 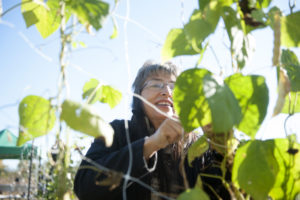 “This has been more than just a project. It has connected us back to the earth,” Eddie Clevenger, the Farm Hub’s Farm Manager, said at the event. Clevenger said that learning the Mohawk tradition of asking permission before entering the garden profoundly changed his relationship with the plot of land. “It feels like it has been blessed,” he said and then thanked the Mohawk tribal members for sharing their ceremonies, wisdom, and way of life.

To give a cultural context for the indigenous relationship with seeds and farming, Greene invited Mary Arquette to share the Haudenosaunee creation story. In her work on the Akwesasne Cultural Restoration task force, Arquette teaches Mohawk children this creation myth over the course of a year. She shared a highly abridged version with the audience:

In the Sky World, in a time before our Earth was even created, Sky Woman was married to the Guardian of the Tree of Stars and pregnant with his child. One day the tree was uprooted and the Sky Woman fell through the hole, grasping at the soil and the seeds as she tumbled downward trying to hold onto her home. As she fell towards this world, the Sky Woman was caught by birds who gently brought her down onto the back of the Great Turtle. Animals from the sea brought soil from the bottom onto the turtle’s back to create land, and the Sky Woman planted the seeds she had brought and sang their songs, and the earth began to grow.

Today, the Haudenosaunee people still refer to the earth as Turtle Island. The creation story, with its emphasis on cooperation and stewardship, continues to be at the heart of their culture and their connection with nature and with seeds. 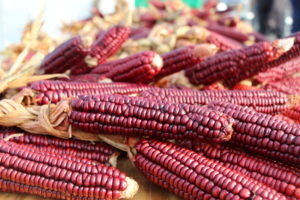 Greene invited Karakwino Tina Square to explain corn’s symbolism. Square is involved with both the Native North American Traveling College and the Ohero:kon rites of passage. She explained that to the Haudenosaunee, Corn Mother is a female spirit and all seeds belong to the women. “Corn teaches women their roles in life,” Square said. “And it teaches men how to treat women.” The garden is hallowed ground where you only enter with good thoughts and utmost respect. “When you go into garden, you treat it as if you are approaching a woman,” Square said. “Before you can touch her body, you need to ask permission. Approach with humility and ask before you plant your seeds.”

The panel members went on to speak about the rites of passage and other traditions that are inextricably connected with the cycles and bounty of agriculture. They shared personal stories—lessons from the plants, experiences of families coming together, seed saving tales of heartbreak and triumph, and legends of a squash that could feed a whole village.

In 2016, the last known cob of Mohawk red corn, used in traditional wedding cornbread, was grown out at the Seed Sanctuary, yielding 800 pounds, which was then used to grow more this year. The sanctuary has also cultivated Onondaga sunflower seeds, Canada Crookneck squash, Buffalo Creek squash, True Red Cranberry pole beans, Potato beans, and Iroquois Buckskin Brown beans. “Everything we grow on the Sanctuary goes back to its home community—that is part of agreement and partnership,” Ken Greene explained.

Through this inclusive collaboration, not only are important seeds being preserved and fortified, but so too is the culture and legacy of the indigenous people of this region. “There is an inextricable link between the restoration our people and the restoration of our seeds,” Rowen White said. “After the harvest ceremony tomorrow, those seeds will find their way and be rematriated back home. And they are the product of a collaboration between the descendents of settlers and ancestral indigenous people working to nourish and feed each other on many different levels.”