I’m standing in a hayfield in May. Listening. Turning my head into the wind, I close my eyes and try to make out a distant song. Then, as if on cue, there it is. One day earlier than last year. It’s the song of the Bobolink, a grassland bird with a warbling, mechanical, almost otherworldly song and striking, contrasting black and white plumage with a prominent blond nape. A small bird at the center of some big discussions. On their wintering grounds in South America, where they are considered crop pests, Bobolinks die from pesticide exposure. On their breeding grounds here in the Hudson Valley, they frequently place their nests in hayfields, often during the ideal time for harvesting hay, baleage and straw used for both livestock and crop production needs. As stewards of the land, how can we balance our responsibility to provide suitable habitat to wildlife with our commitment to feed our communities? 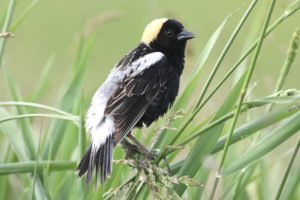 The Bobolink, a grassland bird that breeds in the Hudson Valley. Photo by Pete Schoenberger.

In the 19th century, The Hudson Valley was a landscape dominated by open agricultural areas comprised largely of an extensive grass-based, low-technology farming system. Today, the landscape looks quite different, and Bobolinks are declining across our region in large part due to increased development, reforestation and more intensive management of hayfields and pastures.

The goals of wildlife conservation and crop production are often seen as at odds with one another. In order for both sides to be successful we must be sensitive to one another’s goals. Restricting activities in hayfields for the duration of the Bobolink breeding season might be impractical for most farmers. And at the same time, more intensive mowing isn’t a suitable match for grassland birds. A strategy that works involves biologists and farmers at the table together, generating solutions that work for all involved. New management techniques developed by researchers and incentive programs for farmers hold promise as solutions that work for both wildlife and farmers.

During the 2017 season at the Hudson Valley Farm Hub, we took steps to manage areas of the farm with grassland birds in mind. Our intention with these practices is to create examples of beneficial habitats and management practices that can serve as inspiration to other farmers.

First, most of our hayfields at the Farm Hub have been strategically placed in historically flood-prone areas with the goals of preventing erosion as well as providing habitat for wildlife. Second, in 2018 we plan to try alternative mowing strategies in some of our hayfields. For example, in a recent study, researchers in our region demonstrated that performing a first cut of hay before June and waiting 65 days before the second cut allows Bobolinks to successfully fledge young from hayfields (Perlut et al 2011). 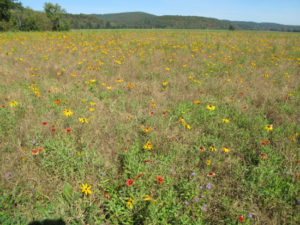 View of the Farm Hub’s Native Meadow Trials this October.

In addition, there are hayfields on the farm that will only receive cuts after late July, when most Bobolinks have fledged. In these areas, the hayfields contain a suitable mix of grasses such as timothy and perennial rye as well as flowering broad-leaved plants such as clover. There is a downside to this strategy. Delayed mowing results in a product that is less nutritious to dairy cows and not as nutrient-rich for building soil health. For the Farm Hub, because we do not currently manage livestock, a late cutting of a hayfield is quite suitable. The cut material is used as mulch in our vegetable operation to suppress weeds and regulate soil moisture. This eventually breaks down to build better soil health. The use of hay and straw is a valuable tool in reduced tillage systems.

Finally, in partnership with the Hawthorne Valley Farmscape Ecology Program and the Xerces Society, the Farm Hub is hosting Native Meadow Trials. The overall objective of these trials is to understand what seed mixes and management regimes can produce good herbaceous habitat for insects and birds. Any seed mixes that perform well at the small scale may be seeded into some of the flood-prone areas as larger-scale test habitat for beneficial insects and grassland birds.

Upon returning to the same hayfield later in the 2017 season, I discover that the Bobolinks have moved on. The fields are silent, the air is still and empty. Across the creek in the clover I continue my monitoring efforts. As I raise my binoculars, I hear a familiar bink bink bink. When I look up, I see a male Bobolink fluttering around. Upon closer inspection, he’s caught the attention of a female perched down in the clover. It is in these moments that I know that there is hope for the future and space for the hard conversations to happen. We should never give up on striving for the things we believe in, whether it be feeding our communities or protecting wildlife. When we give ourselves the time and space to work together, we have the ability to generate solutions to complex issues.

Standing in the clover field, I am comforted in knowing that when I turn my head into the wind, and close my eyes I will again hear the same song of the Bobolinks return.