Healthy soil grows healthy crops. Though this seems straightforward, many farmers have long diagnosed soil health chiefly by the presence or absence of a handful of simple basic nutrients: nitrogen, potassium, and phosphorous. If the levels got too low, farmers typically added them using natural or processed fertilizers. Problem solved, right? Not necessarily. As shown through recent soil tests and demonstrations conducted at the Farm Hub, there’s more to healthy soil than just chemistry.

Last April, three intrepid Profarmer trainees, along with other members of the Farm Hub staff, set out to take soil samples from the Farm Hub’s 1200-plus acres to build a comprehensive map of overall soil quality. Led by Conrad Vispo from the Hawthorne Valley Farmscape Ecology Program, the team dug out 10 soil cores from each of the almost 100 fields and sent the samples to Cornell University for a comprehensive assessment of soil health. On August 25, several dozen farmers and scientists gathered at the Farm Hub to discuss the ratings at an event dedicated to learning more about healthy soil. 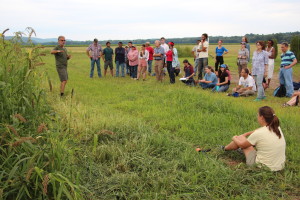 Held in conjunction with Glynwood, GrowNYC, and Cornell Cooperative Extension (CCE), the event was designed to explore the role farming practices can play in improving soil health. After an introduction by Crystal Stewart of the Cornell Cooperative Extension Eastern New York Commercial Horticulture Program, Vispo presented the results of the recent soil tests. In past years, when the farm was managed primarily as a large sweet corn operation, soil health was gauged and managed by adjusting nutrient and pH levels. This year’s soil samples have attested to this traditional approach, as conventional metrics like levels of pH, nitrogen, phosphorous, and potassium were generally very good. Other factors, however, were revealed to be less robust, including soil aggregate stability, organic matter content, and biological activity. Recent studies have shown the crucial importance of these additional factors to the maintenance of healthy soil, especially for farmers using organic methods. Fay Benson of CCE’s South Central New York Dairy and Field Crops Program was on hand at the workshop to demonstrate how, for example, soil with different management practices handles water retention and soil erosion. 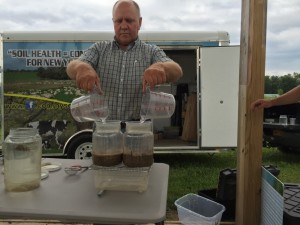 Soil health, Benson says, is all about “aggregate stability.” In layman’s terms, soil aggregates are clumps of particles that bind together, resisting disruption from wind or rain and providing spaces for pores to enhance respiration and water retention. The porosity of the soil can have profound effects on the retention of both water and nutrients. “Aggregates are like homes for the biology,” he explains, “creating a feedback loop that benefits the entire ecosystem. The biology creates the glues that hold the aggregates together, so when it rains the water won’t disturb them.” Sure enough, there was a big difference seen over the course of the demonstrations. The recently tilled soil completely disintegrated when submerged in water, compared to the undisturbed soil, which retained much of its shape.

Also illuminating was the New York Grazing Coalition’s rain test. In the rain test, five different trays were arrayed beneath a nozzle simulating an inch of rainfall over three minutes, ranging from soil that had been completely exposed to soil that had been covered with mulch (tilled) or plants (untilled). Water that hit the exposed soils ran over the surface, taking valuable nutrients with it. The covered soil prevented a substantial amount of runoff while the soil with plants that absorb water managed to prevent virtually all runoff. By looking at the murkiness of the the water that passed through the samples, the audience was able to see (or understand) how stable each soil specimen was against rain. 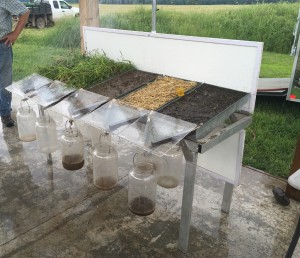 The differences were pronounced. Clearly, farming practices can play a huge part in soil management and the effects of rainfall. The issue, says Farm Hub’s associate director, Jean-Paul Courtens, is that tillage can be ecologically harmful. He calls “plowing, disking, and cultivating a field a major disruption; creating a kind of catastrophic condition.” Catastrophe in nature is normal, and over time the ecosystem will self regulate, he continues, “but when this happens once or twice every year, it’s taxing.” The impact of frequent tilling was evident in the soil health assessment. The Farm Hub has planted a variety of cover crops in order to compare their effectiveness for building soil and their ability to compete with weeds. The best plant types for revitalizing the soil, says Courtens, are grasses and legumes. These help capture atmospheric carbon and fix nitrogen into the soil, and the Farm Hub has identified several varieties to improve soil health. Adding flowering plants to cover crops helps in building biodiversity while improving the soil.

This year, a number of different mixtures of tall grasses, legumes, and broadleaf plants were planted on several acres, allowing the Farm Hub team to identify effective combinations. In the warm season cover crop group, one of the most promising has been a mix of Japanese millet, sunn hemp (or Crotalaria), and sunflowers. The millet is adept at capturing carbon, the sunn hemp helps fix nitrogen, while the sunflowers create good soil structure and provide additional shade against weeds. These plants are great for restoring soil health, as they grow tall very quickly. Further, the shade they produce suppresses weeds, and the sheer volume of biomass protects the soil against erosion over the winter. In this way, a nutrient-rich environment is made available for the next cash crop. Cover crops like these help support beneficial microorganisms in the soil while providing nutrients and organic matter for healthy soil and a healthier crop.