t was early evening at the Hudson Valley Farm Hub and Barbara Hughey, a landscape designer, came to the farm prepared with a notebook and pencil. Hughey, an entrepreneur who runs “Land Stewardship Design” out of her home in Germantown, came in learning mode. 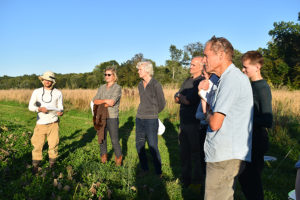 “I am really interested in management technique and land preparation techniques,” says Hughey who is experimenting with native meadows in her own garden and for clients. “Learning is critical to farming and gardening because one is always making decisions that affect the success of a given endeavor. The strength of the informational foundation that we work from helps us greatly in terms of when to act, what to do, and when to wait it out.”

Hughey is far from alone when it comes to a desire to learn and experiment with a garden or farm. She was one of over two dozen people who attended the Native Meadow Trial twilight meeting on September 17. This is the second year the Farm Hub has hosted the event – free and open to the public – in collaboration with Hawthorne Valley’s Farmscape Ecology Program. The goal of the meeting is to share knowledge with regional farmers and other land managers. This year’s attendees included landscape designers, farmers, land managers for land trusts, and backyard gardeners. 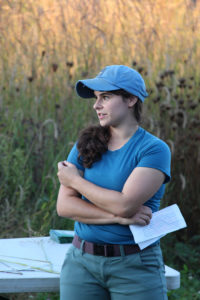 Presenters included Anne Bloomfield, the Farm Hub’s Applied Farmscape Ecology Coordinator, as well as lead researchers Conrad and Claudia Knab-Vispo of the Hawthorne Valley Farmscape Ecology Program. They shared findings to date and the latest developments. Participants also had a chance to visit the test plots, walk through and examine the native meadows, and participate in insect sweeps.

One of the Applied Farmscape Ecology team’s flagship projects is the Native Meadow Trial, which was launched in 2017 with the goal of creating habitat to support biodiversity for both crop production and conservation.  Ultimately the team wants to provide a body of data for farmers. “The idea was to create and share well-documented examples of practical techniques,” Vispo says.

In the trial’s first year, 4.5 acres of test plots were established, without the use of herbicides, on a former cornfield. Each 1.5-acre trial area was split into three distinct plots that received the following treatments: one plot was seeded with several native flower species and a single native grass, another plot was seeded with fewer native flower species and more grasses, and the last plot received the same physical management as the other two but no seeding (the fallow-field control). The seeds were carefully chosen with advice from Kelly Gill, who Knab-Vispo considers a mentor. Gill, who works as a pollination conservation specialist at the Xerces Society, also serves as a technical service provider through the USDA/Natural Resources Conservation Service.

Researchers closely monitor and document the development of the plant composition, as well as the role these wildflower meadows play as an on-farm habitat for beneficial insects and other wildlife. 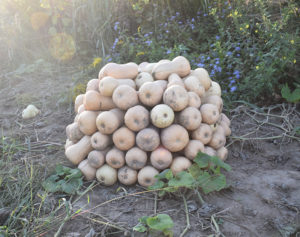 Squash was planted in the meadows to study effects on crop production.

The experiment, now in its third year, has grown to include the planting of squash beside each plot to see if the treatments might influence crop production, presumably through the different insects they support. The squash was planted in June, and it was subsequently monitored for damage and production. At harvest in September, the number and size of squash appeared to be greatest next to the fallow-field control plots, although it’s too early to know if this is statistically significant. The analysis is on-going, and the results will be shared when available.

Bloomfield discussed the symbiotic relationship between birds, native meadows and farming. Native meadows have provided a safe haven when birds migrate and overwinter.  In addition to providing a place for nesting to birds during the breeding season, meadows also offer an important migratory and overwintering base for birds. Just as it does for insects, native meadow habitat has the potential to support birds that provide beneficial services to crops such as pest control, as well as birds that can become crop pests under the right circumstances, she says. It’s therefore essential for landowners to incorporate their specific goals and values when planning a native meadow planting. 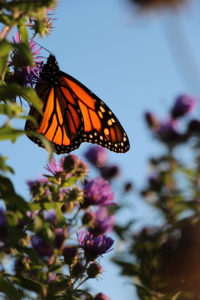 Of the twilight meeting, Bloomfield says, “we hope to help develop best practices for installing and maintaining native meadow habitat in our region both for biodiversity conservation as well as crop production and share that knowledge with the community. It’s important to us to be able to help inform and inspire growers interested in implementing these practices.  For people to be able to come to the farm and see, touch and experience the meadow plantings first hand and ask questions is a critical part of that.”

Questions by participants often centered on the process of creating native meadows, with a number of them showing interest in trying it on their own. Karen Williams, a Hurley resident, is keen on launching a native meadow in her front yard to support pollinators.

Steph Hinkey, a local vegetable farmer, says he’s intent on improving techniques for incorporating pollinators and beneficials and that so far he has seen mixed success. “I’m interested in the process for getting it established and to learn a technique that would work for at least a couple of years,” he adds.  After attending the event, Hinkey said he’s decided to focus on planting perennials, “which will have a longer-lasting benefit without replanting.” He may also incorporate flowers into his beetle banks, and he plans to reach out to Hawthorne Valley for their advice on mixes.

Hughey, the landscape designer, says the event was a tremendous learning experience.

“Even though things looked tough early on and the direct seeded meadow trials went through a rough stage where it looked like the seeding had possibly failed, it turned out that they had not failed,” she reflects. “In the spirit of experimentation, the team decided to wait and see what happened. The ultimate success of the native plants is really stunning and beautiful, in addition to being a prolific habitat. People should have more patience and faith for those native seeds to thrive,” she says.

The Applied Farmscape Ecology Program at the Farm Hub is the subject of an upcoming short film by writer and filmmaker Jon Bowermaster, the founder of Oceans 8 Films. The film is in the final production phase and will be released later this year at screenings and available on our website.