This summer, the Farm Hub teamed up with the UlsterCorps Farm to Food Pantry Program volunteers to provide freshly picked blueberries to Hudson Valley residents in need.

“We didn’t want our surplus of blueberries to go to waste because, first of all, they’re delicious and nutritious,” says Jeff Scott, the Farm Hub’s marketing and logistics coordinator. “And, second, it’s important for the health of the bushes to ensure that they are fully harvested – the bushes can get so full that they will actually break under the weight of the blueberries.”

Founded in 2009, the Farm to Food Pantry program is a collaboration between UlsterCorps, Family of Woodstock, and the Rondout Valley Growers Association. Each growing season, more than 50 volunteers join UlsterCorps’ “Glean Team” to harvest excess produce from farms and private gardens and distribute it to people in need.

Last year, the program gleaned 68,000 pounds from 17 farms, and delivered it to 32 food pantries, shelters, and soup kitchens in Ulster County, according to Ulster Corps Director Beth McLendon, who supervises the Farm to Food Pantry program.

The Farm Hub and the Farm to Food Pantry program share a dedication to addressing food insecurity in the Hudson Valley. “One in seven Americans is food insecure, yet 30 to 40 percent of food that’s grown in America is wasted—and seven percent of that goes unharvested,” says McLendon. “There’s a wonderful connection here: Instead of having food waste, the blueberries are going to folks who don’t have easy access to fresh berries.”

Scott agrees. “The Farm Hub is here to help build a sustainable and just food system in the Hudson Valley,” he says. “We see this project as one more way to do that.” 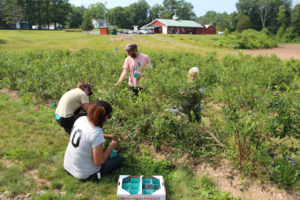 Gleaning crew at the Farm Hub 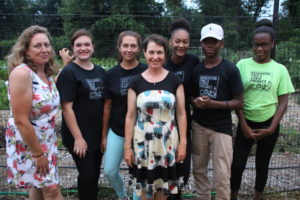 By early August, 30 volunteers had gleaned blueberries at the Farm Hub, according to McLendon. The volunteers included members of UlsterCorps Glean Team, the Bruderhof community, and members of the Rochester Food Pantry; farmer Billiam Van Roestenberg and his crew from Liberty View Farm in New Paltz; Farm to Food Pantry program cofounders Lynda Wells and Fabia Wargin; and Susan Hereth, the YMCA Farm Project’s education director.

This is the Farm Hub’s first gleaning partnership. It’s also the first time that Farm to Food Pantry volunteers have had the opportunity to glean blueberries. “We’ve done scallions, strawberries, apples, and other produce, but never blueberries,” says McLendon. “You have to be strong for blueberries, to be able to stay on your knees.”

Scott and McLendon agree that the collaboration has been a success for both organizations. “It’s a symbiotic relationship—UlsterCorps is helping us, and we’re providing something needed by the community,” says Scott. “I feel optimistic about future projects.”

The blueberries have been “incredibly well received” this summer, notes McLendon, including when they were served baked in a cobbler at the third annual YMCA Farm Project Farm to Fork dinner. The YMCA Farm Project engages youth in sustainable food production at the YMCA’s urban farm in Midtown Kingston and offers affordable fresh produce to the local community.

And, says McLendon, Ulster County food pantries can’t get enough of the blueberries. “People call out ‘More blueberries!’ as soon as we walk in the door,” she says. “Then they ask, ‘Can I take two?’”