Watermelons and cantaloupes made their debut under experimental growing methods

Jeff Arnold walked on the fringes of a plot that appeared to be overgrown with weeds. Underneath the entanglement of overgrowth were vines that curled and ribboned on the surface of the soil. Along the vines emerged near ripe cantaloupes and watermelons. It was early August and the melons were on track to meet late summer harvest.

While the Farm Hub had never grown melons before, Arnold says he was up for the challenge of producing no-till melons.

“Melons are a fun crop to grow and everyone loves them,” he says. “The addition of melons to the crop plan was also a great opportunity to try a new no-till system using some cover crop combinations we hadn’t used before,” he says.

The inspiration to grow melons came from feedback from community organizations who partner with the Farm Hub on food distribution. There was a high demand for melons especially during the hot and humid summer months.

Christine Hein, executive director of People’s Place a non-profit in Kingston, NY, was especially excited when she learned the Farm Hub would be distributing melons.

“Melons fly out as soon as we get them and they are in high demand. We rarely get them–we usually get them once or twice a year in the short growing season,” says Hein. People’s Place, which includes a food pantry, provides food and meals to the community at large.

Beth Albright, co-founder and director of UlsterCorps, notes that while all fresh fruits and vegetables are well received by food pantries (“blueberries, peppers, corn and tomatoes go instantly,” she says) melons are very rare.

Melons aren’t grown widely in the Hudson Valley and those that are grown here are considered a hot commodity. Dakota Miller, who runs Row by Row Farm in Hurley with his wife Mira, says that the melons often fly off the shelf at the farmers markets, their main distribution vehicle. The varieties of melons they produced this past season (Mini Love, Black Tail Mountain, and the Aphrodite Cantaloupe) “are all pretty popular,” says Dakota. Occasionally they donate the melons if they come back from the farmers market or can’t be sold wholesale.

Arnold and the production team decided to use melons as a means to experiment with no-till methods. The Farm Hub is reducing tillage farm-wide and continues to look for ways to incorporate no-till systems into the rotation. The benefits of a no-till farming system include, among others, boosting soil health by letting the soil structure stay intact.

The experimental part centered on a roll and crimp crop treatment that the production team had never tried before. In summer 2020, a cover crop mix of sorghum, Sunn hemp, sunflower, cowpea, and millet was sown, which eventually shot up to 8 feet tall. The cover crops planted in the summer were left standing into the winter of 2021 and then winterkilled. The foundation of cover crops fueled the soil with nutrients in preparation for the melon transplants. The melons were then seeded and germinated in the greenhouse for about three weeks.

In April, the production team used a roller/crimper—a piece of equipment attached to a tractor that flattens cover crops—and rolled/crimped the winterkilled mix. After the mix was flattened, no-till drilled oats and peas were seeded in and left to grow. In early June, the production team rolled and crimped the oats and peas and transplanted the melons into the field.

For a few weeks the rows of melon were covered by mesh protecting them from pests and severe weather.  The fields were irrigated repeatedly.

The melons were then uncovered and fully exposed to the natural environment. By early July, the fruits were flowering and the field was filled with plants, each with male and female flowers (the sex of the flowers can easily be distinguished as the female melons stand out with an immature tiny melon at the base of the flower).

By early August, the production team was anticipating a mid-month harvest. The watermelons had become palm sized and developed their signature dark stripes. In late August though, heavy rains from tropical storm Henri stalled the harvest and at the same time damaged a considerable amount of cantaloupe, which were still ripening. Excessive soil moisture gets absorbed by the melons, causing them to fill with water and split open. In the end the storm had severely damaged a third of the cantaloupes. The watermelons fared much better, and in late August the first harvest took place. Rosa Villegas, greenhouse coordinator and a member of the production team, says one can tell when watermelons are ripe and ready for harvest when the green tendrils start turning brown. The watermelons came in all different sizes, some of them weighing in at nearly 20 pounds.

While this no-till experiment was a relative success, Arnold cautions that the method can be challenging and costly, especially at a commercial scale. Specialized equipment such as the roller crimper and a no-till transplanter are needed along with the time and investment required for cover crops. The ultimate objective for experimenting? “To develop successful no-till systems that work for this farm and that can be adopted by other farmers looking to make their own farms more resilient to a changing climate,” Arnold says.

Despite an unseasonable amount of rain in the Northeast, the majority were harvested and readied to be donated into the emergency food system.

The melons instantly made their way from the wash and pack to food distribution centers such as People’s Place.  People’s Place often distributes the entire melon rather than cutting them into slices. That said, the melons received a wide distribution through the Community Café where Chef Kim Prottas used the melons to make fruit salad. The Café serves an average of 100 meals a day, free to the public.  Plan included using the melons for the Happy Cart converted from an old hot dog cart (the brainchild of Rebecca Moore of the Institute of Animal Happiness) that serves vegan dishes every Wednesday night.

What were some of the specific challenges in this process?

The biggest problem we had was weed pressure. The sorghum reseeded itself in the fall before it winter killed, which we were not anticipating, and the oats and peas did not do as good of a job at weed suppression as we had hoped. A benefit of the towering sorghum, though, was that it kept the melons hidden from birds!

What were some solutions or ways that you addressed those challenges?

We just let the weeds grow, hand weeding would have been the only option and we just didn’t have time.

What varieties of the three performed the best so far and why?

All five of the varieties performed beautifully.  The varieties are Savor, Sarah’s Choice, Sugar Baby, Athena and Sureness.

How did you deal with disease and pest management?

We didn’t have to do much. The thick cover crop mulch kept the plants and fruits off of the soil resulting in lower disease pressure and the weeds hid the melons from birds and mammals. We used a floating row cover to protect the young transplants from insects when they were young, but that was it.

What tips would you give area growers who want to try no-till melons?

It’s a great no-till crop to try using a roll and crimp system. Timing the cover crop planting date so the rolling/crimping coincides with planting dates for the cash crop is crucial, as is having a thick enough cover crop stand to provide adequate weed suppression, and making sure the nutrition is in the soil is of course important. Ours definitely got a bit weedier than it should have but overall, this was a fun and successful project.

What are 1-2 things you’ve learned from this process?

Be careful with sorghum planting dates and varieties, it can reseed!

The following is a step-by-step process for growing no-till melons. 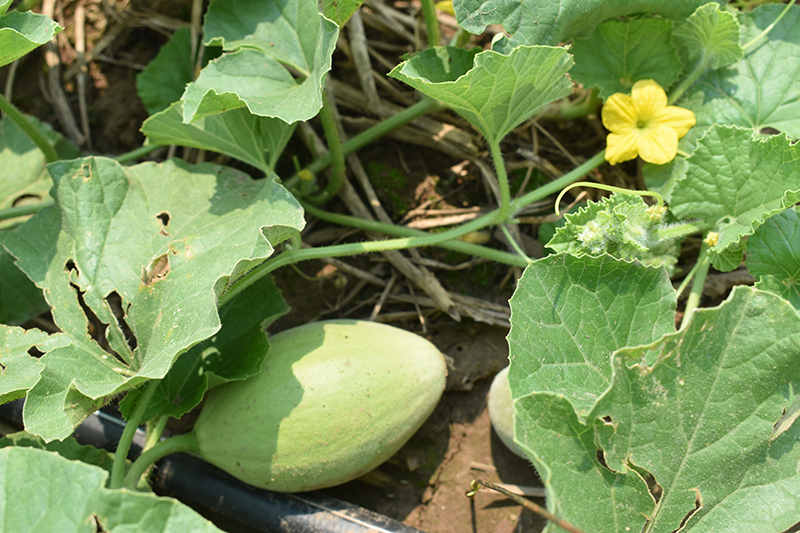