Lindsey Shute is the co-founder of the National Young Farmers Coalition (NYFC). Headquartered in the Hudson Valley, NYFC campaigns on behalf of young and beginning farmers across the country. New farmers face a unique set of challenges like the high cost of farmland, student debt, and complex regulations. Through community building, mentoring, and advocacy, Shute and NYFC work to empower emerging farmers and safeguard their success. In 2014, the White House recognized Shute as a “Champion of Change” for her efforts.

Shute is a longtime farmer herself. Along with her husband Ben, she owns Hearty Roots Farm in Germantown, New York. Below, she discusses her experiences as a farm owner, as the executive director of the NYFC, and as a woman in agriculture.

Nationwide, farmers over the age of 65 outnumber farmers under the age of 35 by a factor of six to one, and the average age of farmers in the United States is now 58. There is a shortage of young people in agriculture who will be ready to step up and grow food for the nation when those farmers retire. Between the last two censuses of agriculture in 2007 and 2012, the industry lost about 90,000 principal farm owner/operators and only gained just over 1,000 young farmers.

We need young people to inherit and take on existing agricultural operations and farms. Having young people in agriculture is also important for implementing new ideas and energizing the industry in a way that can keep it vital and part of our culture as a viable career.

Of all the issues facing young farmers, what’s the most pressing?

There is broad consensus that the number one challenge facing young and beginning farmers is the availability of land that working farmers can afford. For land access, we work with the land conservation community. In our mind, that’s the most viable way to transfer land from one generation to the next. Essentially, a land trust can conserve the land so that owners are able to make a choice to protect the land from development in perpetuity. For the young person looking to buy land, this arrangement can make it more affordable by removing the development potential.

In addition, we’ve been working to facilitate relationships between land trusts and farming communities, and we’re also working at the federal and state levels to make sure that conservation is a priority.

Is student debt another significant policy issue among young farmers?

Student loans are an issue across the board for an entire generation of young people, but with farmers, it’s difficult to make payments in those first years when you’re on a very low-income. For farmers in particular, graduating with tens of thousands of dollars of debt from college compromises their ability to get additional credit to raise capital for their farm.

What we’ve proposed is that farmers be added to the public service loan forgiveness program, which was specifically developed for similar situations where there is a national need for a certain profession. In this program, nurses, government employees, and educators are able to make income-based payments on their loans for 10 years, and as long as they maintain full-time employment in that field, they’re eligible for the remaining debt to be forgiven. We would like farmers to be added to the program to help make agriculture a career possibility for more people.

You’re based in the Hudson Valley. Is there anything unique in your work that you bring to this region specifically?

Most recently, we brought our Hudson Valley Chapter to a meeting with Congressman John Faso. Both Representative Sean Patrick Maloney and Representative John Faso are on the House Committee on Agriculture, along with Kirsten Gillibrand in the Senate. As we do with other chapters, we have to create a bridge for our farmers to have time with their elected representatives.

How do farmer training programs like the Farm Hub’s ProFarmer Program tie into your work?

I like the approach that the Farm Hub has taken in helping young farmers learn at a medium scale. You can learn on a smaller scale, and many self-taught farmers started on a quarter acre and maybe go to an acre and they do well. But there are other farms that have the potential to be larger and to serve a different market, and many of those are run by the farmers that are retiring. It’s great and it’s unique that the Farm Hub is looking to help people move into a more scaled-up farm model.

The ProFarmer Program is also a fantastic opportunity for young people to be able to learn from a farmer [Jean-Paul Courtens] who has achieved so much in his own operation on a significant scale with Roxbury Farm. I remember fondly that before we even brought our land, he was one of the first people who came out and walked it with us.

How does your farming experience translate into your work as an advocate?

Being part of a farm family is incredibly important for me, both in order to communicate with our members and know who they are, and to be able to understand their concerns. Because of the experiences that my husband Ben and I had, and the challenges that we encountered building our farm, we felt as though there was no local, regional, state, or national organization focusing specifically on the needs of young and beginning farmers. Those experiences formed the foundation of the National Young Farmers Coalition at the outset.

Farming is also a highly regulated industry, and as farmers we understand that. For instance, there are new food safety regulations through the FDA that require a lot of water testing, which is an additional expense. We’re now in the process of doing the water tests on the schedule required by the FDA, so I know how much it costs for us to have testing done on our water. It’s really an important thing for me to be able to walk into a meeting with a member and be able to relate to them on a fundamental level. You have to live it to understand it. All of the details that go into things like water regulations can either make a policy really beneficial to a farmer, or by virtue of the paperwork alone, can really hold a farm back. It can make it almost impossible for that family farmer to function in compliance with federal and state law. 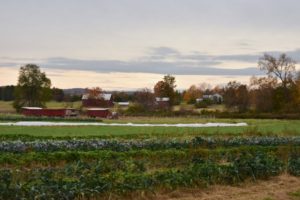 How do you balance the farm and the family?

Being a farmer is part of your identity, your lifestyle, and the flow of your day. For us, the farm is like a member of our family. It’s part of who we are and what we do. There’s no real separation—we live here. Whatever time of day or night it may be, if the farm needs something, we have to be out and take care of it or ensure we have someone who can help. It’s a challenge, but it’s one that we’re glad to have.

The kids have their own garden, and this year we’re going to have a children’s garden for the CSA. We’re trying to find ways where they can slowly but surely feel more like a part of the farm operation. We’re farming at a bit of a scale now, on 25 acres, and there are big tractors with tires taller than they are, so it can be hard for them to engage. We’ve been trying to make modifications to parts of the farm so they can feel like they’re a part of it, too, and it can begin to become part of their identity.

As far as young women in agriculture, we’re leading this movement of young farmers. In the NYFC, many of our staff members are currently farming or have previously farmed, and a wide majority of them are women. Most of the volunteers and leaders in the coalition are women. We’re seeing women find leadership roles within the farm community.

Racial equality is a crucial component of your mission. What are some ways to support diversity in agriculture?

The number one thing that needs to happen is recognition of the role that farmers of color are already playing in agriculture. By that, I mean the population of highly skilled and talented farm workers that are often not counted as owner/operators because they are farm workers. We often talk about the lack of young farmers and the age of owner/operators as a major problem, but it’s a problem that could be potentially solved by giving some sort of status to these farmers of color, many of whom are highly skilled and are already farming. We need to give them a pathway to stay in the United States: to open businesses, have bank accounts, and get driver’s licenses. They offer the greatest potential to not only solve our problem of bolstering young farmers, but also create a more diverse landscape of owner/operators in the United States.

There are organizations right now that are doing important work to help farmers of color and people of color reconnect with farming and agriculture. This work is critical in diversifying the farmer landscape.