Language Justice: Hearing All Voices at the Farm Hub

On a cold yet bright mid-winter day, members of the Hudson Valley Farm Hub’s language justice team gathered in the farm’s classroom to discuss efforts to democratize language within the organization and, by extension, shift the team dynamics on the farm. The panelists were: 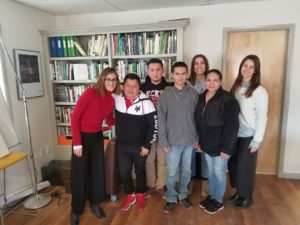 Three of the team members—Raul, Rosa, and Jesus—alternated taking on the role of interpreter (Spanish to English and English to Spanish). To begin, everyone tested their interpretation equipment (an ear piece and a small black receiver with channels and volume control) to ensure equal understanding and access to participation for all monolingual speakers, demonstrating what has become standard practice for meetings on the farm.

The Origins of Language Justice at the Farm Hub

“This all started in October 2015,” says Caitlin, the manager for Organizational Culture and Team Development at the Farm Hub. “We were working on long-term planning for the farm, and we were not able to engage the voices of all the staff members on account of the language barrier.” The Farm Hub hired social justice consultant Pancho to help them facilitate the organization’s transition toward a more inclusive and participatory culture. It was Pancho who first introduced the concept of language justice.

Pancho views expression of and access to language and culture as basic human rights that are often denied to non-English speakers in the United States. “Language is one of the key aspects in which we express our humanity,” he says. “So language justice is this notion of acknowledging and engaging in the whole humanity of those we work with.”

Pancho notes that introducing the concept of language justice at the Farm Hub was easier than in most places because the principles aligned with the organization’s existing mission, which focuses heavily on promoting equity and resilience. Still, the process of shifting the group’s mentality and priorities and making the logistical accommodations was not without its challenges.

“When we first started doing this language justice approach at the Farm Hub, it wasn’t at the top of everyone’s mind,” Raul says. “People needed interpretation, but it wasn’t easy for the whole organization to take the time to consider the steps it takes to make that happen.” He recalls interpreting for important events with little or no time to prepare, and even meetings where conversation was interpreted still only had written materials available in English. “[The process] was inconsistent at first,” he says. “So we couldn’t always get the information across to the people who needed to know what was happening.”

Pancho attributes this slow start to ingrained habit and under-examined privilege. “There is a personal inertia we all have, which is that it takes time for us to change. But then there is also an institutional and social inertia in which privilege, in this case language privilege, keeps reproducing itself,” he explains. “That’s why it too often becomes an afterthought. If I benefit from privilege, it’s very easy for me to forget about the needs and situations of those who don’t have it.”

In the two years since the Farm Hub initiated its language justice efforts, the organization has taken many steps to break through the inertia. The entire staff now embraces the concept.

The organization has invested in simultaneous interpretation equipment and organized ongoing language classes for English and Spanish learners. Caracol Language Cooperative, a worker-owned cooperative that seeks to “create inclusive multilingual spaces where each of us may feel free to bring our whole self into the room,” has been instrumental in the Farm Hub’s adoption of language justice. The Farm Hub has worked with Caracol in multiple capacities, engaging them to facilitate interpretation training for bilingual staff members, hiring their interpreters for some all-staff events, and exploring ways to partner on language justice projects outside of the Farm Hub.

The all-team morning meetings on the farm include interpretation, reinforcing the importance of language justice on a daily basis. “Now, people that usually wouldn’t have the opportunity to share their ideas about something on the farm are able to do that because of the interpretation,” says Jesus. “That leads to leadership.”

Eustacio immigrated from Mexico in 2008. “When I first arrived, I understood absolutely no English,” he says in Spanish. For the past three years, Eustacio has been taking English classes through the Farm Hub. “At first I was nervous. I didn’t know how to say what I wanted, and I was ashamed of how I spoke. But over the course of time, I learned a little bit more and then by leaps and bounds,” he says.

In the past, Eustacio had to ask family members or coworkers to inform the office if he needed to take a sick day, but now he does that himself. He has also been able to get to know his English-speaking coworkers better. “I am very friendly and personable, and now I can communicate with everyone and chat for a while in English,” he says. “These are great experiences for me, and I am very proud of myself because I am advancing.” His English language skills have also expanded his employment opportunities; during the off-season, he now works at a bakery in Kingston.

For Rosa, language justice is about family and the preservation of culture. “It’s really important for Hispanic parents who have kids to talk to them in both languages, English and Spanish,” she says. “I know a lot of Hispanic kids that don’t know how to speak Spanish. They have family in Mexico, grandparents or cousins, and it’s really hard to communicate because the kids don’t understand.”

In 2017, the language team began holding weekly practice interpretation sessions to sharpen their skills. “One of the concepts of language justice is to make sure that everybody’s voice is heard and everybody can share what they know. We practice that in a smaller group,” Raul explains. Participants often practice interpretation using stories from their own lives, creating the added benefit of team members getting to know one another better.

“We’ve been able to really bond around these practices,” Raul says. “That’s what language justice tries to do overall: to allow everyone to hear each other and to bond. So these sessions have been great for us.”

In 2016, the Farm Hub launched the Native American Seed Sanctuary in collaboration with the Seedshed and the Akwesasne Mohawk tribe. The main goals include growing native seed varieties and helping to preserve indigenous seed sovereignty and culture.

Over the past two years, the Farm Hub staff and members of the Akwesasne tribe have come together for various ceremonies, such as the harvest celebration. At these events, three languages are spoken: Mohawk, Spanish, and English. The Mohawk perform the ceremonies in their native language, then interpret into English themselves, after which the Farm Hub’s language justice team interprets in Spanish. “It’s actually very deep and powerful, and it captures language justice,” says Raul, pointing out that both English and Spanish are languages only spoken on this continent after colonization. “When they do the ceremonies in their native language, it is hearing one of the true languages of this land.”

One of the most powerful impacts of the language justice work at the Farm Hub has been to increase the opportunities for Spanish speakers to share their expertise and leadership skills.

“I’ve been here three years and a part of this team since it began,” Raul says. “It has made it possible for Eustacio to lead classes in cooking or in baking foods that are based on our cultural values. So Eustacio has become a teacher to a lot of English speakers, showing them how to do so many things that we do back home.”

Jesus recalls witnessing a similar dynamic in the staff community garden: “When the garden first started, we were making raised beds. I saw that Victor, one of the vegetable team members who doesn’t fully speak English, was able to help Caitlin make her raised bed, speaking in English and Caitlin in Spanish too.” 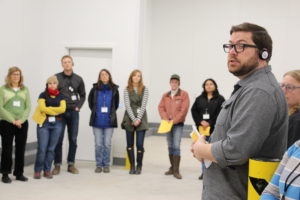 The bilingual learning has also increased camaraderie and communication in day-to-day farming activities. The Farm Hub’s farmer trainees (ProFarmers) and other staff have also been learning Spanish, so the effort to communicate goes both ways. “Before, Spanish speakers wouldn’t talk much in the field,” Rosa says. “But now that there have been all these English and Spanish classes, everyone is trying to talk to each other—in English and in Spanish.” Jesus adds, “I don’t see any shame or embarrassment. It’s been great here in this environment. It’s not just about working together, but being a community, being friends with each other.”

“To me, language justice has been one of the tools that this organization has used to close the unintentional segregation that we used to have,” Raul says. “It used to be all-white office folk who had very little interaction with the people of color staff who worked in the field. Now people can actually interact with one another, and it doesn’t feel like two separate teams who work for the same organization. It feels like we’re one team learning together.”

But the work is by no means done. Creating equality around language is an uphill battle against the predominant culture of segregation and privilege for native English speakers in society at large. “It is in the beginning stages,” says Jen, Community Relations assistant. “But, at the very least, it elevates our expectations of ourselves and our organization, which not only brings a sense of willingness but also enthusiasm to continue the work.”

All of these language justice efforts must be made in the midst of running an active production farm. “The crops don’t stop needing you in the height of the summer,” Salemi says. “The commitment is there, but it is slow work. And sometimes we don’t see where we should be pushing more, and we’re perhaps resting a bit. But we know this is just the beginning of the journey.”

According to the US Department of Labor’s National Agricultural Workers Survey (NAWS), of the estimated 2.5 million farm workers in the country, 71 percent are immigrants, with 70 percent reporting Spanish as their dominant language. Salemi continues, “Through our language justice work, the experiences that we bring from our own lives and the trust that we’re building with each other will continue to support our organizational transformation and, hopefully, enable us to share what we’re learning with the community beyond the Farm Hub.”