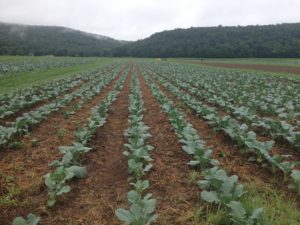 The Farm Hub is hosting a new research trial that focuses on broccoli. The initiative emerged from challenges faced during the 2019 growing season. While early harvests of broccoli were robust in quality and yield, later crops were struck with black rot, downy mildew, and Alternaria, which significantly reduced the broccoli yield (see Tracing Broccoli).

Brassica crops such as broccoli are susceptible to several fungal and bacterial diseases which are often triggered by warm, wet weather. Black rot, downy mildew, and Alternaria are common fungal diseases of brassicas, but to date there are few effective solutions.

“Black rot is a disease we have struggled with in the past on this farm. It can be spread by contaminated seed, equipment, and weed seeds,” says Jeff Arnold, the vegetable production manager at the Farm Hub.  As a result, broccoli heads can rot and become unsalable.

The Farm Hub’s response to the problem is the Brassica bio-rational trial, a collaboration with researchers from Cornell that tests the impact of Brassica bio-rationals (low-risk pesticides that contain naturally occurring beneficial microorganisms) on broccoli. The goal is to help growers make decisions for managing these diseases. 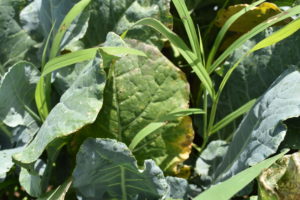 “There are many bio-rational products on the market that growers can use on brassica crops. By testing them side by side on a broccoli crop, we can better analyze how each product works and inform growers so that in the future they can produce better quality brassica crops, more efficiently,” says Teresa Rusinek of Cornell Cooperative Extension Eastern New York Commercial Horticulture and one of the researchers on the trial.

“Black rot is challenging for both conventional and organic growers because there are so few products that give any level of control, and most of these are copper based,” Rusinek says.

There’s also the risk that copper can burn plant leaves and leave residue in the soil. Many of the available sprays – often a mix of copper and bio-rational products have provided mixed or inconsistent results.

“Some of the biologicals actually contain living microorganisms, but copper often will reduce their efficacy because it can kill that beneficial microorganism” explains Grundberg. Without proven or specific guidelines of what combinations work and the frequency they need to be applied under various disease pressure scenarios, a lot is reduced to hit or miss for farmers. 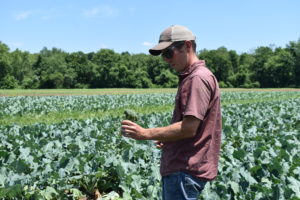 The trial is evaluating seven bio-rationals and two copper formulations in a replicated trial of broccoli. The bio-rationals fall into a category of pest control materials called  “biorationals” that includes OMRI-approved products with no to low-impact on human health, non-target organisms, and the environment.

Researchers are siting the trial in last year’s broccoli field where several diseases were found to be particularly problematic. Rusinek and Grundberg also plan to look at the performance of the sprays under different weather conditions, which means the trial could be extended beyond the 2020 growing season.

“The real goal is to provide growers with better management recommendations based on our regional climate.” Grundberg says.

Carbon sequestration, the natural process of removing carbon dioxide in the atmosphere and storing it in the soil or ocean, is widely understood to be an important factor in mitigating climate change. The connections between soil health, gas emissions, and farming, however, extends beyond carbon dioxide. Greenhouse gas flux—impacted by factors including human activity, environment, and soil types—also includes methane and nitrous oxide.

Ethan Grundberg, a researcher at Cornell Cooperative Extension Eastern New York Commercial Horticulture Program (CCE ENYCHP), believes that it is important to expand the conversation beyond carbon sequestration. According to the EPA, methane has a global warming potential that is 38 times higher than that of carbon dioxide.  Nitrous oxide’s is 298 times higher.

“Given the much larger potential impact of CH4 and N2O on climate change, it is critical to understood how farming practices relate to the net flux of these gases,” he says, referring to research indicating that practices that increase carbon sequestration correspond with the release of the other gases.

Now, a new research trial at the Farm Hub is tracking the amount of these three gases (the most significant greenhouse gases in agricultural systems) released over the course of a growing season.  The researchers are collecting data that will hopefully help growers find ways to promote carbon sequestration without unintentionally increasing the release of more potent greenhouse gases like methane and nitrous oxide, says Grundberg who designed the trial.

This April, Grundberg and other researchers from CCE and the Cornell University Department of Biological and Environmental Engineering started collecting gas samples from chambers installed in the fields which reflect the gas profile being emitted from the soil. The samples will then be analyzed using a gas chromatograph to determine the concentrations of the gases over a known time period. 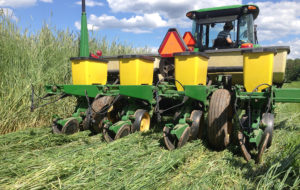 The research involves compiling data on a variety of plots, some that are conventionally tilled and others that are blanketed with roller-crimped winter rye. Winter squash will be planted into the plots to mimic a typical vegetable production scenario.

“The goal is to capture changes in the rate of release of the three types of greenhouse gas fluxes over a season, which is impacted by soil moisture, soil temperature, and more. Those factors are strongly influenced by the presence of a growing cash crop like squash. It is important to gather data in a real production system,” Grundberg says.

The trial is an extension of a project that the research team began in 2018 when they started gathering data on carbon dioxide, nitrous oxide, and methane from vegetable growers who practice reduced tillage in the “black dirt region” in Orange County, NY, an area known for its high organic muck soils.

The trial at the Farm Hub is additive in that it brings yet another soil type to the equation, and “that can really impact what happens with these gases,” says Grundberg.