It is an unofficial moniker that she also uses in her email sign-offs. The combination may be an enigma for who don’t see the link, but for Regalado, 33, the connection is obvious. All three are her passion and one is a professional aspiration: her dream is to be a professional interpreter in farming.

A dream once unimaginable to her is coming to fruition. Last fall Regalado was one of two aspiring interpreters who were chosen to participate in the Hudson Valley Farm Hub’s pilot Shadow Interpreter Training program. The program was created and organized by the Farm Hub’s Language Justice program, which includes a core team of bilingual staff who, among their other job and production-related responsibilities, provide regular translation and interpretation for meetings and events at the Farm Hub. 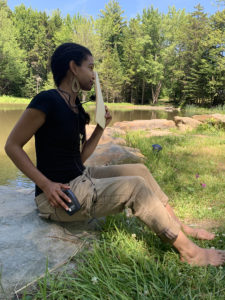 The program combines study and practice under Language Justice staff, and the opportunity to shadow Language Justice interpreters at different levels of increasing responsibility. The program doesn’t have a set length and the length depends on the progress of the individual. In addition, there is an ongoing mentorship component that continues even upon completion. The participants were also compensated for their time.

Adriana Pericchi, the Farm Hub’s language justice coordinator, says the program, still in pilot stage, is inspired by the need to provide training and support to bilingual people, many of whom are already tasked with doing language work at their jobs or for their families, and ultimately cultivate a network of interpreters regionally.

That said, there is a lack of professional interpreters in many professional sectors. Traditionally, opportunities were limited to the international diplomacy, medical, or court arenas. “It is challenging to find trainings for more general interpreting settings that are also accessible to folks with mixed formal education levels,” explains Pericchi. “It’s also hard because many bilingual people cannot overcome the financial burden of taking time off of paid work to attend training and paying its cost.”

In order for an increase in Spanish language inclusion in agriculture settings, recognition of language labor as labor, more trained bilingual growers and farmworkers, as well as more existing interpreters with agriculture knowledge are needed, Pericchi says.

That said, there are specific challenges in interpreting in the food and farming space.

Born in the Dominican Republic, Regalado immigrated to the U.S. at the age of three. Her parents spoke limited English and they often asked her to interpret for them: she helped her father study for an exam that would help him get promoted at work, and assisted her mother in studying for her citizenship and driving tests.

“Our community was pretty insular and the majority of the population are Spanish speakers, including most of the folks we interacted with on a regular basis, but during doctor’s appointments and school visits, I would have to interpret,” she explains.

As an aspiring farmer her love for the land led her to interpretation work. After completing a year-long medicinal herb growing apprenticeship, she attended Soul Fire’s Farming Immersion Program as an attendee but also helped with interpretation. She began thinking about exploring more work as an interpreter. But there were roadblocks including access to training (there were no programs) and compensation. 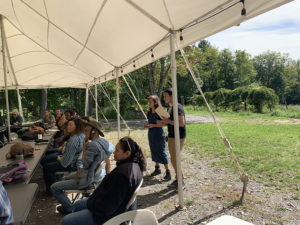 Practicing interpretation at an event.

It was the Farm Hub’s two day intensive Interpretation for Social Justice Workshop that she participated in that got her hooked on the idea of pursuing it as a career. The workshop, led by Caracol Language Coop, a worker-owned cooperative that provides interpretation and translation, was open to staff and members of partner organizations.

“From there, the doors were swung wide open to this world of language justice. It turns out I have a skillset that I didn’t really understand could be used to advance the movement,” she says.  “I hope that my work in language justice can facilitate my transition into full-time farming medicinal herbs on rural lands.” Along with being a professional interpreter, she also hopes to farm for her livelihood.

The subsequent interpreter training program gave her a toolbox of skills, strategies, and techniques in interpreting. Regalado says the program was intense, well-organized and she particularly valued “the arch of the training with the opportunities to do real intensive work.” Over time she built up confidence.

She especially valued the program’s teachers, notably Raul Carreon, post-harvest coordinator, and Pericchi, who are now her mentors.

“They have such a degree of high skill and sense of knowledge around language justice and the community,” she says. “They are good teachers and know how to share and relay this information.” 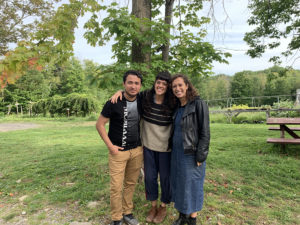 From left, the Farm Hub’s Raul Carreon, Adriana Pericchi and Lala Montoya, another trainee under the pilot program.

Most importantly Regalado values the camaraderie and sense of potential the program has fostered. Since reaching the mentorship stage of the shadow interpreter program, she has worked as a freelance interpreter including for Soul Fire’s Spanish-First skillshare sessions this past spring aimed to help farmers tackle challenges from Covid-19. She partnered with Soul Fire Farm to create a style guide for interpreters.

Regalado calls interpreting for the program a “powerful experience.”

“Being able to serve my community and having this concrete, meaningful, and important work has really been a life-line in these times,” she says.

The Farm Hub has plans to expand the program with the idea of creating a network of professional interpreters in the region, specifically for the agricultural sector. In partnership with programs such as Applied Farmscape Ecology and Agriculture Education & Training, there is a vision to eventually provide farming-specific classes for interpreter trainees to widen their understanding of agriculture.

Expanding the pool of professional interpreters especially in food and farming systems will not only require training and funding, but also a coalition of sorts to “centralize and organize efforts to establish a culture, and meet the need for interpreters and translators,” Regalado says.

“Expanding the understanding of Spanish-only is important,” she adds, noting that it is important for there be Spanish-first events so not everything is interpreted into Spanish, so Spanish language has visibility.

When not interpreting she works on an urban farm in her hometown Jersey City, and enjoys spending time with her 5-year-old son.