This past December, second year ProFarmer, Jayne Henson, traveled to Puerto Rico in the aftermath of the devastating hurricanes to help farmers rebuild and prepare for the challenges ahead. Below is a firsthand account of Jayne’s experience.

In early September 2017, Hurricane Irma hit the coast of Puerto Rico, leaving over one million people without electricity. Less than two weeks later, before the people affected by Irma even had a chance to start recovering, Hurricane Maria slammed into the island. Upon learning about the devastation in Puerto Rico, I immediately wanted to help. As part of the ProFarmer Training program at the Hudson Valley Farm Hub, I have learned to focus not only on the ins and outs of growing quality, healthy vegetables, but also on food justice and our role in the food system.

After reaching out to some of my friends from Puerto Rico I learned of an effort called “Guagua Solidaria,” or The Solidarity Van. This program is a grassroots coalition of folks who form “solidarity brigades” that travel to farms on Puerto Rico and help them rebuild. I was fortunate enough to get connected with this effort and was invited to the island as part of a brigade formed by members of the Queer Kitchen Brigade (QKB),” an organization started by Puerto Rican and Latinx New Yorkers who wanted to send healthy food to those devastated by the hurricanes.

The group began by pickling and canning fresh produce donated by New York farms and sending shipments to the island. They also organized pop-up canning classes and workshops to teach others in the community how to preserve fresh food while providing relief for people in Puerto Rico.

After landing in balmy San Juan and being picked up by my compatriots, we headed to our temporary base of operations. Driving through the streets was dizzying. From a cursory glance it seemed as though the island was back on its feet, as the airport and hotels on its outskirts appeared clean and full of electricity and life. However, it didn’t take long for that façade to fade.

The farther we got from the resort areas of San Juan, the more evident the extent of the devastation became. A quick 20-minute drive along the highway revealed fallen billboards and power lines and entire blocks of homes that once provided shelter and community now reduced to piles of splinters and sheets of tin. Low-income neighborhoods in states of devastation pockmarked the landscape of seemingly unaffected resort villas and luxury high rises.

This theme would carry out for the duration of our stay as we witnessed tourist-heavy areas receiving the utmost attention and access to amenities, while rural communities were barely hanging on through sheer force of will and community resiliency. 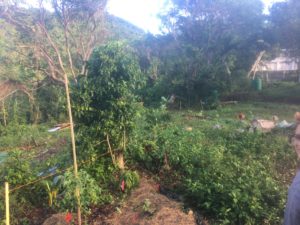 Bosque Del Monte Grande, the first farm we visited, sits on about eight acres of land. Most of it is along a mountainside and at its highest point it flattens out into a one-acre garden with a small wooden structure that looks out over the mountainside and down to the sea. Its sole proprietor is a woman named Norycell, affectionately called Nory. From the moment I met her, it was clear that the heartbeat of her land, crops, and animals echoed in her pulse.

Nory raises a small herd of goats, two donkeys, and a newly formed flock of chickens. Along with her livestock she also raises perennial crops such as bananas and other fruits, as well as several annual crops, her specialty being okra. One evening, she revealed to me a canister of okra seeds that she had been painstakingly saving and selecting for resilience, removing plants that showed the slightest signs of weakness, and cultivating those that showed strength. It was clear to me that these seeds were her treasures.

The land that was once clear and vibrant with growing vegetables was now covered with fallen timber and debris. Our purpose was clear: we were there to help her take it back. Along with clearing the land, I was also assigned the task of building a compost sifter that Nory herself had designed.

Her farm exists as a place of community knowledge. She does not sell her produce at market but instead uses it to feed those that come to visit her farm, which serves as a place of education where she teaches others how to cultivate their own path to sustainability regardless of their financial status. She also works closely with NRCS on agro-forestry and sustainability programs, and she is an organic certifier for Puerto Rico. Her work is, in a word, inspiring.

After three days in Cabo Rojo we headed farther inland and higher into the mountains of Sabana Grande to our second farm of the trip, Finca Flamboyant, which describes itself as “A QTPOC-stewarded land project, artist retreat and home in the southwest mountains of Puerto Rico.” They are “a sanctuary for marginalized folks to spend time in, work on their art, learn/teach about farming and plant medicine, skill-share, or just come and take a break for healing and rejuvenation in a rural, tropical setting. … Recognizing the intersecting impact of racism, homophobia, and gender based violence, Finca Flamboyánt is specifically a project for and by Queer People of Color impacted by colonialism, displacement, and diaspora.”

La Finca sits atop a lush green mountain looking out onto rainforest valleys full of dew and mystery. As we drove up the mountainous roads, I was educated about some of the agricultural history of the area and how it was most widely used for its coffee production. Nearly vertical mountainsides were cleared, cultivated, and planted with coffee trees. Puerto Rico is full of the echoes of colonialism, and as we wound our way up the mountainside its impact reverberated in my head.

The effects of Maria were harsh on Finca Flamboyant. Grand structures and mango trees were demolished, covering ground that had once been vibrant and usable, and so we set about the familiar task of clearing downed trees. Much of the top soil had been washed away through erosion, so we took this opportunity to use the wood litter to build an erosion barrier to help prevent further breakdown. Once again, I was tasked with construction duties as we worked to create a “Vivero,” a tropical nursery or greenhouse used to shield young plants from the harsh sun and high temperatures. The roof also functioned as a rain catchment system. Seeing our structure standing tall atop the mountain and knowing that it would be used to bring new life to this farm and the people it cares for gave me great pride and joy.

Back in my San Juan hotel room as I took my first shower of the trip I felt the dirt, sweat, and tension of tired muscles wash from my body, now covered in bug bites and sunburns. I sat on the deck and listened to the waves wash onto shore. I thought about what Puerto Rico had given me, what I owed Puerto Rico. The things I will never be able to pay back. It is the responsibility of all of us who call ourselves Americans to protect and nurture these lands that were colonized, to do everything in our power to give them a voice, and grant them freedom. Not the freedom we want for them, but the freedom they choose.