Winter Wildlife: In Search of Birds at the Hudson Valley Farm Hub

Winter in the Hudson Valley brings a timely succession of sparrows, waterfowl, raptors and other birds that spend the warmer months of the breeding season farther north.

Winter Wildlife: In Search of Birds at the Hudson Valley Farm Hub

It is a common misconception that all birds fly south for the winter. In reality, winter offers the unique opportunity to see certain species of birds that only spend the colder months in our area. Winter in the Hudson Valley brings a timely succession of sparrows, waterfowl, raptors, and other birds that spend the warmer months of the breeding season farther north.

This winter, the Farm Hub participated in two efforts that allowed us to learn more about the birds that call the farm home during the non-breeding season: a series of winter raptor surveys conducted by the New York State Department of Environmental Conservation, and the 116th Audubon Christmas Bird Count. These two projects contribute to regional and national initiatives that monitor bird populations and, in turn, aid in informing decisions concerning the conservation of wildlife. Moreover, understanding and observing the wildlife at the farm allows us to intimately understand the ecological synergy between the agricultural landscape and the wildlife that use it.

For example, the Dark-eyed Junco, a small, handsome, slate-gray songbird, breeds in the Catskills, Adirondacks and farther north during the summer months. As a general rule, in the wintertime Juncos move southward to lower elevations. They turn up at our backyard feeders as well as fields and hedges where they feed on grass seeds and weed seeds to sustain themselves.

Another familiar visitor is the White-throated Sparrow with their “Old Sam Peabody” song (or oh-sweet-Canada depending on who you ask) and attractive facial markings. White-throated Sparrows can be seen hopping gregariously on the ground in weedy fields and hedgerows. Other birds that can be seen at the farm in the winter include American Tree Sparrow, Eastern Bluebird, Bald Eagle, Snow Goose, Great Horned Owl, and Northern Harrier, among others. 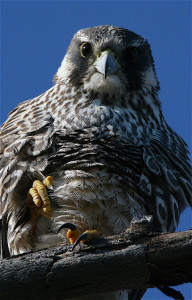 The main objective of the New York State Department of Environmental Conservation (NYSDEC) winter raptor surveys is to document the roosting and feeding sites of Short-eared Owls and Northern Harriers. In New York State, Short-eared Owls are listed as an endangered species and Northern Harriers are classified as threatened. Both raptors prefer to winter in large tracts of open habitats such as grasslands and farm fields.

The first survey began at dusk on a gray, breezy and unseasonably mild evening and continued until just after sunset. At the start of the survey, a Northern Harrier was observed on the ground feeding on prey in a field of recently harvested grain corn. Northern Harriers spend the breeding season in open areas such as grasslands, tundra, fields and prairie habitats. During migration and in the winter months, harriers hunt and communally roost in farm fields and grasslands among other habitat types. At the close of the survey, NYSDEC staff had documented five harriers, all aged as juvenile birds from the 2015 breeding season. Other species recorded included a Cooper’s Hawk, Red-tailed Hawk, a pair of Bald Eagles, and a Peregrine Falcon which swooped in to take a Mourning Dove.

On December 19th, birds were recorded at the Farm Hub as part of the Audubon Christmas Bird Count, or CBC. This year marked the 116th count nationwide and the 66th CBC for the Mohonk Lake/ Ashokan Reservoir area, which includes the Farm Hub property. The CBC is an annual volunteer-run census of birds in the Western Hemisphere conducted on behalf of the National Audubon Society. Historically, around Christmas competitive bird hunts took place with the objective to shoot and kill as many birds as possible. It wasn’t until December of 1900 that the suggestion was made to count birds instead of kill them. And thus, the Christmas Bird Count was born. The main objective of the CBC is to show population trends of bird species for the purpose of wildlife conservation efforts. Highlights of the Christmas Bird Count at the Farm Hub included a pair of Great Horned Owls, five Northern Harriers, a pair of Bald Eagles, sixteen American Pipits, one Savannah Sparrow, and one Red-winged Blackbird. (Click here to read the Full Report)

Some birds, such as our migratory shorebirds, only pass through the Farm Hub on migration in the spring and fall to refuel for the journey ahead. Others are only in our area during the breeding season, migrating south to Central and South America, Mexico, and the Caribbean for the fall and winter. Increasingly, with the shifting climate, some species of birds that once migrated in the winter now stay in our area as long as there is adequate food and water available. Some examples include Canada Goose, American Robin, and Great Blue Heron. 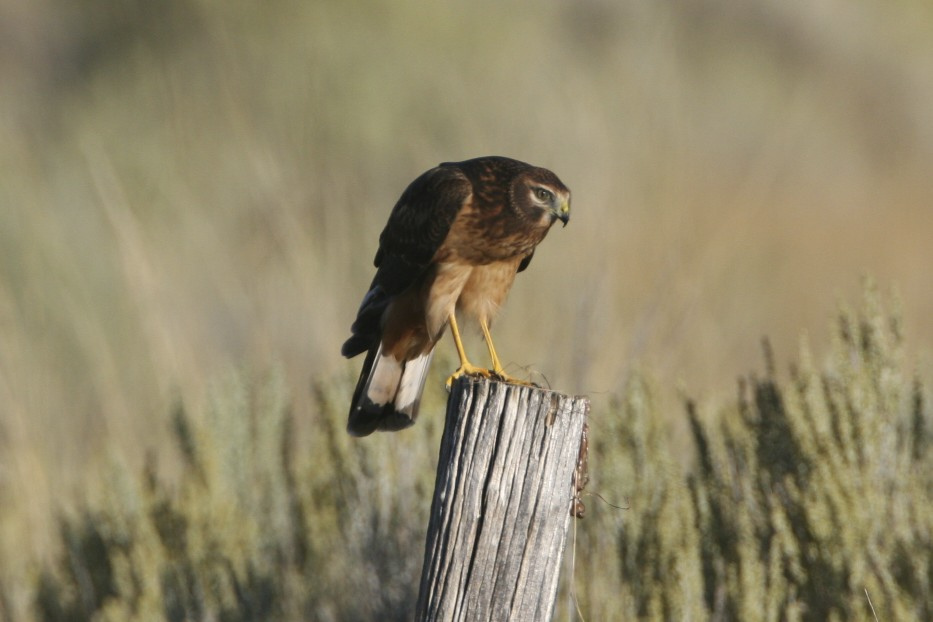 Birds are not only agreeable to observe, they can teach us valuable information about the landscape in which we live and work. Through projects such as the Christmas Bird Count and NYSDEC winter raptor surveys, we are able to contribute to avian conservation efforts in our region. By more profoundly understanding birds and other wildlife, we deepen our own relationship to the land. Although on the surface winter can sometimes appear gloomy, frigid and dismal, really there is plenty to appreciate, experience, and observe. Winter birding offers the perfect remedy for cabin fever. This winter, bundle up, hit the fields and enter the world of winter birds. It is a story that is being told all around us every day, if we only take the time to stop and listen.