Gone unchecked, the Colorado potato beetles can cause U.S. farmers millions in damage Above photo by Jared Belson

The time was right to do what was at hand and the weather was favorable too. A morning of heavy rain shifted into sun and blue sky, and it was summer solstice. 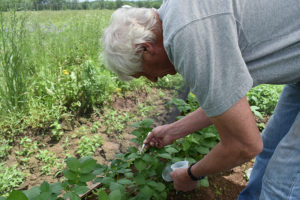 Elson Shields applies Colorado potato beetles to potato plants at the Hudson Valley Farm Hub in Hurley, NY, as part of a research trial to study whether nematodes can combat the pest.

Elson Shields, a Cornell entomologist, along with his colleagues Teresa Rusinek and Chuck Bornt, arrived at the Hudson Valley Farm Hub with a bevy of plastic containers filled with Colorado potato beetles (CPB), the subject of their research and a growing threat to potato production.

The scientists were here to release the beetles – still in the early larvae stages – on potato plants at the Farm Hub to see whether the beneficial nematodes that the soil had been inoculated with would parasitize and kill them. Later, the researchers will regularly visit the farm to monitor the CPB larvae to determine if they are able to complete their life cycle and emerge out of the soil as adult beetles. If the nematodes prove to be an effective natural enemy to the beetles, the number of adult potato beetles will be significantly lower than the larvae deployed. 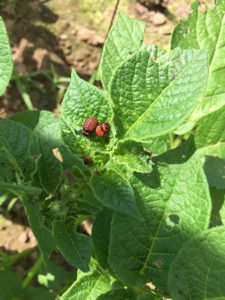 Colorado potato beetles are most damaging at the larvae stage when the larvae gravitate toward the tender leaves of potatoes and eggplants.

Colorado potato beetles stand out visually with their black and yellow striped rounded backs. Adults have a penchant for feeding on potato leaves, but the beetles’ larvae, a light shade of red with black markings, are perhaps the most damaging as they rapidly defoliate the plant, stunting growth. Gone unchecked, the beetles can cause farmers millions in damage. The pest is widespread in every state except for Alaska, California, Hawaii, and Nevada, according to the State Department of Agriculture in California.

The Colorado potato beetle research trial, a two-year study, is being conducted at the Farm Hub and replicated at the Homer C. Thompson Vegetable Research Farm in Freeville just outside of Cornell’s campus in Ithaca.

This is the first time New York native nematodes are being tested on the Colorado potato beetle. While lab and field trials have been conducted in states outside of New York using different strains of entomopathogenic nematodes, the benefit of using native New York nematodes is they are acclimated to New York soils.

“We are hoping to be able to suppress the population of the beetle, which could be beneficial to all kinds of growers, both conventional and organic,” says Jeff Arnold, vegetable production manager.

Nematodes have been successfully used to combat other agricultural pests attracted to vegetables, including black weevils in strawberries and wireworms in sweet potatoes.  Could there be success with the Colorado potato beetles too?

It also made sense to conduct the trial at the Farm Hub, where plots were already inoculated with nematodes under a previous trial, Rusinek says. Cornell researchers recently completed the wireworm research trial, which tested the efficacy of nematodes on the wireworms (the larval stage of the click beetle) that were eating the sweet potatoes. That field trial, launched during the 2017 growing season –- after wireworms were found in large numbers in 2016 — has yielded positive results; harvest assessments of sweet potatoes in the fall of 2017 showed nematode treated plots overall had 36 percent less wireworm damage than the untreated control plots. Results from 2018 show damage from wireworms were very low on all plots, including the control plots. 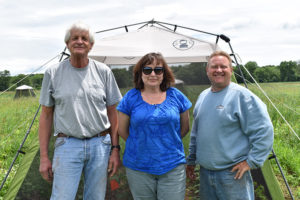 Soil sampling conducted each spring and fall indicates the successful persistence of the nematodes in the inoculated plots.

Shields, who joined Cornell University’s Department of Entomology in 1987, has built a career testing the nematodes’ efficacy on tackling pests drawn to agricultural crops.  He says nematodes were a bit of kismet. “Early in my career the Dean said I need you to solve the Alfalfa snout beetle problem,” he recalls. Shields and fellow researchers found that nematodes were an enemy to the beetle, which had devastated alfalfa crops used to feed dairy cows.

Turn the clock forward and 20,000 acres in New York have been inoculated with nematodes by Shields and members of his team. Nematodes have been found to successfully tackle wireworms in sweet potato production and the Black vine weevil in strawberries. He is now focused on the Western corn rootworm. The New York native nematodes are currently available to growers for purchase through the Shields’ laboratory where they can follow instructions on how to rear their own nematodes from a starter cup purchased from the lab.

There are several effective pesticides available to combat the pest, both conventional and organic, but resistance to these products has become a problem. The killing of off-target beneficial insects is another drawback to pesticide use. 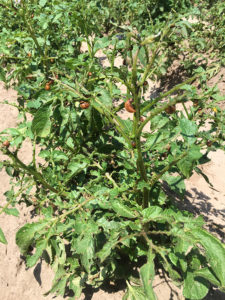 An eggplant whose leaves have been devoured by Colorado potato beetle larvae.

Cornell identified various non-chemical prevention methods including at least a dozen naturally-occurring predators, parasitoids, and pathogens to help prevent infestations.  Some were more effective than others. There are other proven methods such as trench traps, specific crop rotations, and flaming in which propane flamers are placed over the crops. There are varieties of potatoes (notably Elba, Prince Hairy and King Hairy) that are resistant to Colorado potato beetles. Other solutions are significantly more time-intensive such as picking the bugs off the potato leaves and drowning the beetles in buckets of soap and water.

In states such as Maine, where potatoes are the primary crop (based on acreage), researchers have tested ways to suppress the beetle including sucking the pests off of the potato plants with vacuums mounted on tractors and burning them off with flamers. Although they found the organic pesticide Entrust (Spinosad) effective, “there is resistance to it in other parts of the country including New England,” says Jim Dill, an entomologist at the University of Maine Cooperative Extension office. Dill says the researchers have not yet tried nematodes for biocontrol.

At the Farm Hub, the Colorado potato beetle trial started in the spring when the potatoes – a white variety named Eva – were planted.

Shields had raised the beetles in his laboratory in Ithaca where they were fed potato leaves. The Colorado potato beetles in the containers had morphed from eggs to larva of a distinct shade of light pink with black dots. The team released them at a growth stage at which they were visible, noting that every beetle needs to be tracked.

Researchers set up 12 tents over a quarter of an acre, each measuring 10 by 10 feet and containing potato plants. The tents allow researchers to track the beetles, the potato plants, and the nematodes while also keeping out other bugs, Shields explains. Eight of the twelve tents are over soil that was inoculated with the insect killing nematodes and the remaining are nematode free. They released 100 adult beetles (both male and female) in each tent and they predict each female will lay about 400 to 500 eggs. “Potato beetles are very prolific,” Shields laughs.

Back at the Farm Hub on this pretty summer solstice day, Shields carefully released each beetle, gingerly placing the pock-marked leaf the beetles were sitting on onto the potato leaf. A beetle the size of a rice grain took a free fall and Shields exclaimed, “no grab on!” He exhaled when the beetle found a soft landing on a leaf, and another one latched onto a leaf and began feasting. 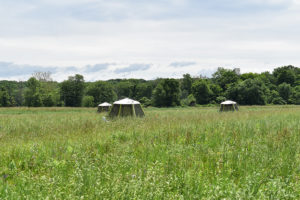 The tents allow researchers to track the beetles, potato plants and nematodes.

Later in the season, the research team applied the overwintering generation of beetle larvae to the plots. Those larvae will enter the soil to pupate and remain there through the winter emerge in the spring of 2020 unless the nematodes get to them first.

“We think the overwintering period will provide a better chance for the nematodes to do their work,” says Rusinek. “The tents will go up again in the spring and depending on the results from the overwintering generation, we may ask to run the trial one more year on Colorado potato beetles.”

Curiosity and a drive to help growers fuels the researchers’ continued focus on nematodes. Shields pointed to the landscape of tents and said, “this is part of the evolution using nematodes as a classic biocontrol.” Moving forward, Shields plans on researching whether the New York nematodes can be used on other vegetable crop pests such as flea beetles and the cabbage/corn seed maggot.

History of the potato beetle

The Colorado potato beetle was first discovered by Thomas Nuttal in 1811, and described in 1824 by Thomas Say from specimens collected in the Rocky Mountains on buffalo-bur, Solanum rostratum Ramur. In 1859 the beetles connection with potato plants was made, when it started destroying potato crops about 100 miles west of Omaha, Nebraska. The insect began its rapid spread eastward, reaching the Atlantic Coast by 1874. The evolution of the name Colorado potato beetle is curious because the beetle is believed to have originated in central Mexico, not Colorado. It had a series of names from 1863 to 1867, including the ten-striped spearman, ten-lined potato beetle potato-bug, and new potato bug. Colorado was not associated with the insect until Walsh (1865) stated that two of his colleagues had seen large numbers of the insect in the territory of Colorado feeding on buffalo-bur. This convinced him that it was native to Colorado. It was Riley (1867) who first used the combination Colorado potato beetle. The Colorado potato beetle, Leptinotarsa decemlineata, occurs in Mexico and in most of the United States (except Alaska, California, Hawaii, and Nevada), including Florida. It was first reported in Florida in 1920, but it is not often a major pest. It also occurs in southern Canada and is a pest in Central America. The species has been introduced into Europe and parts of Asia. The false potato beetle, Leptinotarsa juncta, is found primarily in the eastern United States from northern Florida to eastern Texas (with only Sabine County reported as of 2005), north to Missouri, southern Illinois and Indiana, and east to Maryland, West Virginia, and Virginia.

Note: the above information comes was reprinted from the University of Florida http://entnemdept.ufl.edu/creatures/veg/leaf/potato_beetles.htm

Side bar photo by: Jared Belson