This past spring, on a windy day in March, the field crops team and I drove out to a field where there was a soybean crop. The snow had just left, and the ground was still too soft to leave the farm road. We needed to make a plan. The flattened beans were a remarkable color of silvery grey: the stems and branches like messy strands of hair on the ground. The field had looked promising all year until the fall when relentless rain knocked the soybeans down and they rotted on the ground. Now, in conventional farming terms, the crop was a failure, the beans were swollen and stained purple with mold, money left out in the field. But the soybeans were still there, and they had shaded most of the weeds out. So the field was clean, and when you looked out across its water-logged expanse, felt wild, unkempt, the color of a wolf’s fur. This was our cover crop now, and we knew the soil underneath had a lot of potential. Maybe the crop wasn’t a failure after all. 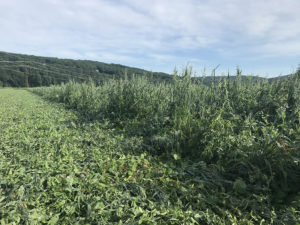 In June the cool season six-way mix gets rolled and crimped.

The farm road bisected the 200-acre field, and somewhere near the middle we all got out of the truck and walked in different directions.

The soybeans crunched under our boots. It was strange to see the field gone to waste.  We wondered what to do with all these volunteer seeds that would germinate when we worked up the field and the soil temperatures warmed.

Every field you’ve driven by is an intimate expression of its farmers. Every day, thousands of people zoom by this field on highway 209. When I think about how our minds are on display in the field, this public exposure makes me—and maybe all farmers—a little anxious. That morning in the field, I remember how differently the light reflected off the metallic-colored strands of the winter-beaten field; how the field felt like some kind of giant mirror, an external expression of ourselves.

Have those driving by noticed our straight lines and carefully executed pirouette tractor turns at the edge of the field? Or have they caught the mistakes that haunt us all year: the drill skips, where that one seed cup was plugged and only weeds grew in the empty row?  If you look closely, you can also see the choices farmers make before planting. How did they prepare the field? And what do you think will be planted next? This—the multi-year living map of what was, what is, and what will be—is something you may not see when you drive by. 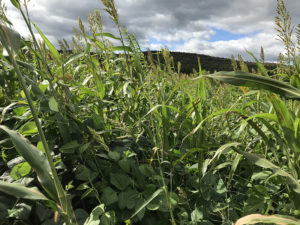 In early October, the warm season six-way mix after the first light frost.

We gathered back at the truck, somewhere out of the wind. One option we discussed, perhaps the most traditional approach, was to disc up the field. But unlike cool-season weeds, these soybeans wouldn’t germinate in the cold soil. So discing them up would be like planting them again—mixing them into the soil. We all agreed, however, there would be some benefit to working up the land. We would kill weeds, and prep the soil for planting our oats and red clover, which we needed as a cover crop for next year’s corn on this field. But a strong flush of soybeans would come with warmer days, and probably take back the field. Around this time, we were also getting interested in planting diverse cover crops instead of monocrops like red clover.  What if we planted a multi-species cool-season cover crop that could shade the soybeans out? What if we then rolled this cool-season cover crop and kept the no-till cycle going with another warm-season cover crop?

Back at the farm, we put together a crop rotation that included keeping the field completely no-till, which means we would not work up the ground at all. As soon as we were able to get into the field, we would plant a cool-season mix of oats, peas, Fava beans, phacelia, sugar beets, and kale as cover crops.  We would roll this mix when the oats were in the soft dough stage, a reproductive phase after flowering when the plant has nearly exhausted itself and is most likely to stay down after the rolling pass when the kernels are squishy and not fully mature. Then we would plant a warm-season mix of Sorghum-sudangrass, sunn hemp, buckwheat, cowpea, sunflower, and teff. All these plants are designed to winterkill in our zone. Let winter, or nature on its own, end our crop, without any intervention.

And as for the soybeans?  They had already fixed nitrogen in the soil but we also wanted their ground cover, their mulch, and maybe more importantly, the rye still covering the soil from when it had been rolled when the soybeans went in the ground. All those layers of mulch—three or maybe four tons of biomass per acre—had at one time been on top of the soil. We didn’t want to start over by discing everything up and burying everything down.  This felt a little risky, especially within the constraints of organic management.  But when we began to think about cover crops as ground cover, as a form of tangible weed suppression like spreading out weed cloth over bare ground, we could see all the fields on the farm differently. We saw how they could break up compaction with tap roots, recycle nutrients and feed bacterial life in the soil, sequester carbon, and capture nitrogen from leaching away and going into the groundwater. That summer, we planted most of the farm fields in warm-season cover crops, and we planted no-till whenever possible in order not to disturb the soil. 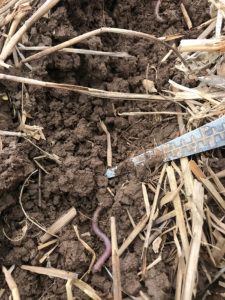 When we began planting the cool season mix that spring, we checked the depth of the seed behind the drill. And every time we scratched down an inch or so into the soil with our fingers, we uncovered worms. Worms wriggling uncomfortably in the daylight, recoiling and shrinking back into the night of soil. Finding all these worms, we all agreed, was very exciting.  Something different was happening in the soil. We never saw worms like this when planting into a fallow field.

By July, we were in the field terminating the 6-way cool-season mix of oats, faba beans, kale, sugar beet, and phacelia with a 25-foot-wide roll and crimper. The thickness of the rolled down crop made the ground spongy, and the wet stems crackled under the roller as the stem walls burst. Outside the tractor, the air smelled of fresh pea shoots and kale. Thousands of Cabbage White Butterflies flitted through the air and disappeared into the four-foot-high lush forest of greens yet to be rolled. There was so much to look at in the field. So much more than, say, your average field of red clover. The sheer volume of the multi-species biomass in the field, of insects flying, all of this made me aware of the air, of the space where the oats, hulls hanging from their heads like chandeliers, dangled and the blue sky began. 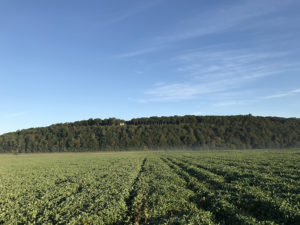 In late June the oats are mowed off as the clover emerges; the clover eventually takes over the field.

I stood in the waist-high peas and oats, watching the tractor and roller transform the field vertical to horizontal, making room for the warm-season mix of superstars like Sorghum-sudangrass and sunn hemp, whose tassels and flowers would soon rise more than eight feet above the ground. I saw the roller crimper getting closer. The sound of the engine grew louder, drowning out the chorus of insects vibrating in the air and the buzzing bees. I stood in the wetness and tenderness of peas; their purple, star-shaped flowers, and the jagged, fan-shaped leaves of kale.

Though they were all going flat before the roller crimper they would continue to feed the soil for years. And from this dying lattice of stems and leaves would emerge the next wave of cover crops and then corn, primed and ready to jump out of the ground.