Lenapehoking, the first Lenape-curated exhibition of its kind in New York City, opened on January 28 with a virtual kick-off event. In his opening remarks Laszlo Jakab Orsos, Vice President of Arts of Culture for the Brooklyn Public Library, called the exhibition opening “an historic moment.”

These include beaded bandolier bags, a turkey feather cape, and tapestries made of Purple Kingsessing Bean vines, pods, and seeds.

The plant elements come from a seed garden in Ulster County, NY – a collaborative project born of a partnership between The Lenape Center and Hudson Valley Farm Hub.  Before entering the exhibit space, visitors are welcomed by a glass case featuring jars of Lenape beans that were grown and harvested at the Farm Hub. The exhibition was curated by Joe Baker, The Lenape Center’s Executive Director and co-founder.

Lenapehoking is the Lenape name for Lenape land, which spans from Western Connecticut to Eastern Pennsylvania, and the Hudson Valley to Delaware, with Manhattan at its center. Due to centuries of colonialism perpetuated by genocide, forced displacement, and systemic oppression, today the Lenape Diaspora is dispersed throughout the U.S. and Canada. The Lenape diaspora includes five federally recognized nations in Oklahoma, Wisconsin, and Ontario. Reference: The Lenape Center

Lenapehoking is accompanied by talks, activities, and a forthcoming publication – all designed to amplify the contributions of the Lenape nation.  The revamped Greenpoint library branch, for example, features a new rooftop teaching garden that holds the saplings Indigenous fruit trees (the trees are from Sam Van Aken a sculptor and art professor at Syracuse University).

A series of talks at the library are centered around the Lenape through the lens of poetry, land access, and agriculture, with a lecture on April 14 that will focus on returning seeds to the homeland.  In addition, an anthology featuring the work of Lenape scholarship and poetry is soon to be published by the Lenape Center with Brooklyn Public Library.

The planting of Indigenous fruit trees provides a window into the existing collaboration between The Lenape Center and the Farm Hub. In 2019, Baker and K Greene, founder of the Hudson Valley Seed Company and Advisor to the Farm Hub, began discussing growing ancestral seeds at the Farm Hub for seed saving. That same year, the Farm Hub started hosting a small grow-out of “Sehsapsing” also known as Oklahoma Delaware Blue Flint Corn and in 2020 extended it to beans.

“It’s just remarkable what those amazing individuals do in terms of their work in the field and the love and the care that they bring to this, which I feel is an art form,” says Baker of the growers who have tended to the garden. “The other thing Farm Hub has allowed us to do, is they’ve allowed us to cry and to laugh, because this whole issue of returning seeds to the ancestral land, there’s an emotional element to that. I have a great fondness for all of the people at Farm Hub who do the amazing work that they’re doing to really protect and continue and sustain the lifeways and the foodways of Native people.”

With the artwork, the anthology, and the garden – it feels like things have come full circle for Baker. Lenapehoking is a vision that Baker has long held that has now come to fruition.

“Through the arts, we can come to discover and understand complex history. I think the arts are a language of communication that allows for a better understanding, a new pathway of knowledge,” Baker says. 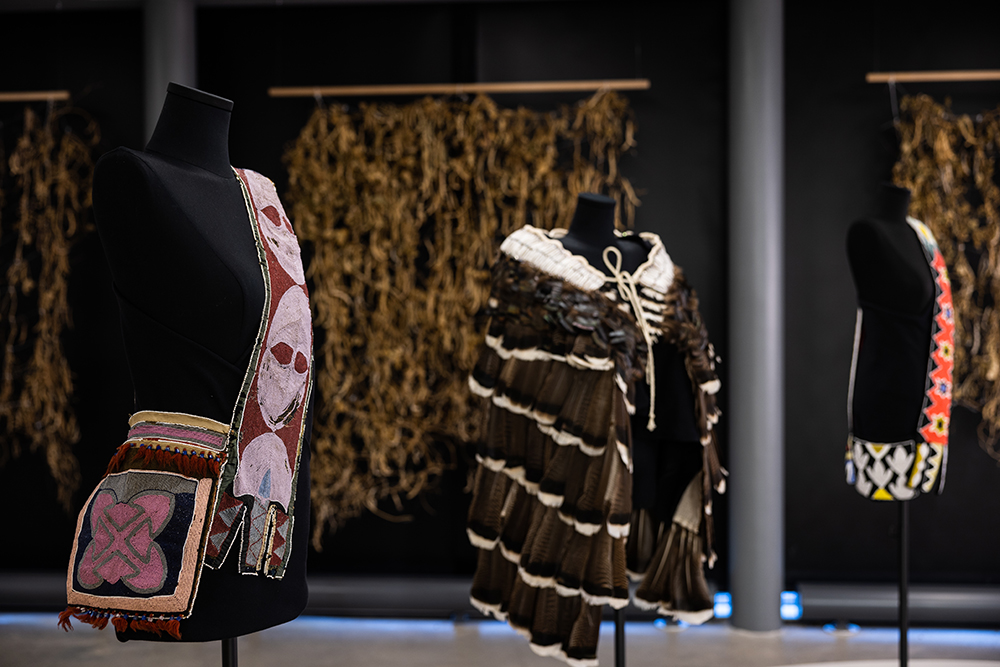 A journey
The story behind the exhibition starts with the birth of The Lenape Center. Baker, a scholar, artist and educator, co-founded the Center in 2009 along with Hadrien Coumens. The spark was fueled by a sense that the Lenape language and culture was fading as artworks, stories, and memories ended with the passing of the older generation. The Lenape Center’s mission is to continue Lenapehoking (widely translated as the Lenape homeland) through community, culture, and the arts.

Soon after it launched, the Center’s co-founders began seeking a home for the envisioned exhibition. Would it be a gallery, a museum, an open space? Over the years Baker and Coumens reached out to various organizations to discuss possibilities with the Brooklyn Public Library being one of them.

“The Lenapehoking exhibition does not relegate Indigenous history to the distant past,” said Linda Johnson, President and CEO of Brooklyn Public Library. “It traces a through-line to the Lenape artists working today, who have much to teach us about memory, survival, and stewardship.”

Family history
Growing up, Baker was surrounded by the stories and culture of his tribe. He was born and raised in Dewey, Oklahoma, as a member of the Delaware Tribe of Indians also known as the Lenape. His great-great-grandparent Simon White Turkey moved the family to Indian Territory in 1887 when the family, along with some 30 other families, were forcibly removed from their land in Kansas. As Baker describes it, as a child he was surrounded by his heritage. A great-grandmother was a fluent speaker of Lenape. Clothes and moccasins in his family were passed down from generation to generation. There was the “community family.” Nora Thompson Dean, an influential member of the Delaware and a mentor to youth, was a constant in his life.

“My mother worked at the corner drug store and it was the town center where everyone checked in,” says Baker.

As a youth Baker gravitated towards studying art.  “Art had always provided a certain escape into another world for me that as a child I could get lost in,” he explains.  He studied painting at the Oklahoma State University later transferred to the University of Tulsa where he earned his bachelor of fine arts and master of fine arts.  As a young career artist, he painted and taught at colleges and universities, and later moved into a variety of museum and academic positions. The work took him across the country from Phoenix, AZ where he worked at the Heard Museum, and to New Mexico where he served as Academic Dean at the American Institute of Indian Arts.  He ultimately moved to the East Coast where he started The Lenape Center.  From 2019 to 2022, Baker was the Executive Director of the Mashantucket Pequot Museum and Research Center in Mashantucket, CT.

As the head of The Lenape Center, he has devoted his work to amplifying the art, stories and contributions of Indigenous peoples. Early on, his passion for the beaded bandolier bags inspired Baker to research the history of the artform and to create his own. Beaded bandolier bags are a rare find now, with many having disappeared by the early 1900s on account of their having been acquired by collectors. In 1999 he created his first bag, a journey that took him a full year.  The work is intricate, with beaded designs that are unique to each tribe.  As part of The Lenape Center’s mission, Baker has shared his knowledge and artwork with of a number of cultural institutions including the Metropolitan Museum of Art.  Three of Baker’s bags are on display in the Lenapehoking exhibition.

The exhibition and beyond
In 2020, the Brooklyn Public Library and The Lenape Center started their partnership and began planning the exhibition.

“I love the idea that the exhibit is in a non-hierarchical museum setting, is in a very democratic space, it’s at the ground level of a community, and it’s accessible without hesitation to all people,” he says. “What this has demonstrated to everyone in the community is that there’s interest and people do want this experience and this knowledge.”

To read the Q&A with Joe Baker click here

At the center of the exhibition are five beaded bandolier bags (historic and contemporary) and a turkey feather cape created by Rebecca Haff Lowry, a Citizen of the Delaware Tribe of Indians, and her mother-in-law who is from the Yurok nation. The exhibition also includes a display of jars of seeds that were harvested from corn and beans grown at the Farm Hub.

On April 28 the saplings of the Indigenous fruit trees will be part of a program on the rooftop garden, and the next day a group will be planted in Prospect Park marked with a plaque and later commemorated with the launch of the anthology of historical essays, interviews and poetry.

Since the exhibition opened it has been attracting at least a hundred visitors per day, with many school groups scheduled to come.

“People are so hungry to learn and know about the place and the Lenape people,” says Cora Fisher, Curator of Visual Art Programming at the Brooklyn Public Library. The hope is to use the material within the exhibit to create a “whole curriculum” for schools and the public at large, she adds.

There is also a vision for a future permanent space for the artworks, the stories, and for education. The Lenape Center is working toward finding a home “for exhibitions, gatherings and for all of our work. We need a place for tribal folks to gather.”

Baker pauses as he reflects on how far the work has come when it comes to preserving the culture and heritage of the Lenape people.

“It’s been a long journey. But I’ve always wanted to be able to be living in the homeland. And now that’s finally here, and it’s a wonderful thing. To be here in the ancestral land doing the work I’m doing. I’m very grateful,” Baker summarizes.

To review the series of talks and events click here.