On January 28, KingstonCitizens.org hosted a public forum at Kingston City Hall on the potential impact of the proposed Pilgrim Pipelines in Ulster County. The Hudson Valley Farm Hub was a proud co-sponsor of the event. The Farm Hub’s Associate Director of Community Relations Brooke-Pickering Cole also spoke at the event (see statement below). 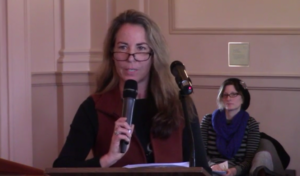 Locally, the proposed route passes through Kingston, Ulster, Esopus, Marlbourgh, Plattekill, New Paltz, and Saugerties. The pipelines would transport up to 400,000 barrels of Bakken crude oil on a daily basis and traverse 257 water bodies and 98 farms, potentially impacting up to 12,700 acres of farmland.

The pipelines would also go through several sections of the City of Kingston, including the Farm Hub’s northernmost farm field and Native American Seed Sanctuary. This Seed Sanctuary was established in partnership with the St. Regis Mohawk Tribe of New York State and the Hudson Valley Seed Company to grow and preserve Native American seed varieties that are in danger of disappearing.

For more information about the pipelines and their potential impact, visit KingstonCitizens.org for their summary of the event.

For a map of the pipelines and their potential impacts on agriculture, see here.

I’m here on behalf of the Local Economies Project. We are a non-profit organization based in Kingston working to build a resilient food system in the Hudson Valley. Our land-based project, the Hudson Valley Farm Hub, is an education and demonstration farm which we started in 2013 on land formerly owned by Gill Farms on 1,250 acres stretching from Marbletown up to Kingston.

We’re here today as members of the agricultural community, as land stewards in the city of Kingston, and also as caretakers of farm property that has been targeted by Pilgrim for construction of the Pipeline.

When we think about the pipeline and the farmland along its route, we are gratified that the positive declaration issued last fall by the lead agencies calls for addressing impacts to agriculture as part of the review process. But we’re also mindful that what needs to be looked at aren’t just the narrow strips of land where the pipeline would be installed, but the fields in their entirety, and any farms downstream from the many places where the pipeline would cross creeks and streams.

A farm field, like most things, is an organism—you can’t effect one piece of it without having an effect on the whole, and in fact you probably can’t impact one field without affecting the one next to it, and maybe even the one next to that.  Soil, water, farm equipment, insects, wildlife, and the farmer herself or himself—they all work together.  So the impacts of the construction phase, and, God forbid, if there were to be a leak in the pipeline, these need to be looked at against the context of not just a sliver, but rather thousands acres of farmland from Albany to New Jersey, and of course for us here in Ulster County.

Our farm field in Kingston is over near the New York State Thruway Exit, bordered by the Esopus creek and the Thruway. This is where we are doing a seed saving project, our Native American Seed Sanctuary, in collaboration with the St. Regis Mohawk tribe of northern NYS and the Hudson Valley Seed Library. We’re growing heritage varieties of corn, beans, squash, and sunflowers—to save these seeds, and these varieties—from extinction. We’ve had visitors from the tribe, groups of kids, and volunteers all hand planting and harvesting out in that field.  It’s pretty great.

As proposed, the Pilgrim Pipelines would cross the Esopus Creek at our seed sanctuary and continue into and through our field alongside the Thruway.

We share our story with you knowing that this is just one among possibly hundreds of farm fields along the proposed pipeline. And it makes us wonder…how many other fields like this that we ignore driving down the highway have special meaning, or satisfy a basic human need like food, or work in service to the greater natural system?

I think the answer is most of them. After all, every farm is important, whether it’s a small family farm or a large non-profit farm—whether it’s on a mountain top or next to a highway. And we think these are some of the questions we need to be asking, and the questions we hope and trust that those who are in charge of this review process will also be asking.