Sharing a passion for farming with Kingston High School students

The Hudson Valley Farm Hub recently hosted a group of special visitors – students from Kingston High School. Primarily juniors and seniors, the teens come from a diversity of backgrounds. What they all share, however, is an interest in agriculture and food.

Roxanne Smith, a sophomore, was transfixed as she observed rows of newly planted garlic. Jeff Arnold, the Farm Hub’s vegetable production manager, explained to the students that the acre of garlic was planted over two straight days by his team of 10  production staff.

“Two days is pretty good,” says Arnold. This elicited some oohs and ahhs from Roxanne and her classmates who marveled at the hard work involved in hand-planting the garlic. Arnold touched on the importance of having a crop plan. “It’s like your guiding star until the end of the season.” He also talked about what inspired him to go into farming.

“I knew I didn’t want a desk job, I wanted to work outside and be serving a greater purpose,” he told the students. “It’s a great career, I love it.”

Roxanne was one of 75 students who are enrolled in an agriculture science class at Kingston High School now in its second year. The class uses agriculture as a platform to teach organic growing methods including soil building, cover cropping, and discussions on topics related to food justice. The course is a for-credit elective and is open to students in all grades.

Science teacher Reagan Weissenberg says the class was inspired by a desire to expand students’ knowledge of the local food system including highlighting the importance of local fresh produce.

Farm Hub Director Brooke Pickering-Cole says, “The visit was great – a first for us, and informative as we begin to explore opportunities for welcoming specialized groups in future years.”

Since most of the students don’t come from a farming family and some have never visited a farm, they were particularly enthusiastic about getting out of the classroom to see how it all works.

As part of the class, they came to the Farm Hub for a visit and tour, which covered topics from organic growing to food safety and ecology. Farm staff members, representing a diversity of expertise, inspired them by talking about what they love about farming. 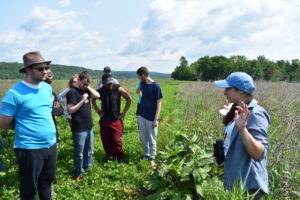 Highlights of the tour included:

The class is the brainchild of Weissenberg and Safa Bitawi, science teachers at Kingston High School who wanted to start a school garden.

Weissenberg said her inspiration came from wanting to teach young people how to grow their own food and be knowledgeable about local produce. The class is also part of a bigger goal to bring healthy and fresh produce to the school. “We are trying to make the whole campus edible,” says Weissenberg. The school has allotted 10,000 square feet for a school garden where the students will be growing vegetables.

That idea extended to creating a program in which the school garden and concept of an “edible campus” would be a core part of the class. An assortment of produce such as beans, carrots, radishes, potatoes, corn, and strawberries have already been harvested.  The season doesn’t stop with winter either; the class grows leafy greens inside with LED lights.

There is also an emphasis on learning by doing—in this case practicing growing methods. Over the past school year, students have started composting and in addition to growing vegetables, they are cover cropping. Roxanne talked excitedly about the raised beds she and her classmates built for growing potatoes and kale.

Social and environmental justice are other important elements of the curriculum. This past year, Weissenberg tapped The Underground Center, a Kingston-based non-profit working with schools to design a curriculum that focuses on social change. Discussions on racism in the food system and land ownership are an essential part of learning too.

“We are trying to change who gets food, and we are trying to envision what a just food system looks like,” says Chase Randell, program director of The Underground Center.

Students came to the Farm Hub with many questions including how the equipment works, what it is like driving a tractor, what is involved with planting.

“I just want to experience what you do at the farm,” said one student. By the time the tour was completed, they left with answers to questions such as what is Farmscape Ecology?  What is a botanist?  How long does it take to grow strawberries?  What is a Bobolink?

Weissenberg says the students found the day to be inspirational. Highlights of the tour included meeting the staff and learning that the majority of produce grown at the Farm Hub goes to donation.

“They were super happy to see the number of diverse people at the farm,” she says. “They were also really impressed about where the Farm Hub is bringing its food – such as to the non-profits. That is in line with all ethics we are learning this year.”

Other students such as Christian Wiley signed up for the class to consider farming as a career; the 10th grader left convinced it is a job he is interested in pursuing.

“This is my second time at a farm and the first time I am getting stuff explained, like where food is coming from. Also, it is an outdoor job, you don’t have to be indoors all day,” he says.